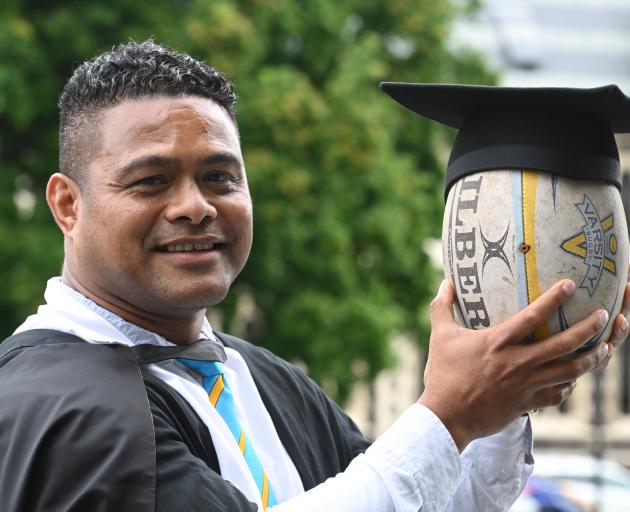 After gaining bachelor of commerce in management from the University of Otago in 2017, he undertook studies for a master’s degree in sustainable business.

He will graduate with that second degree in a ceremony at the Dunedin Town Hall today.

His studies were first interrupted when his son, Aseri (now 3), required a heart operation.

Aseri spent three months in care, including at Starship Hospital in Auckland.

Then, in July this year, as Mr Maiono was handing in his thesis, his 13-year-old daughter Anabella died from an aneurysm.

Since moving from Fiji to Otago in 2006, Mr Maiono has recently helped develop a new "Seafarers" sevens team at the Otago University Rugby Football Club.

He has also helped develop a new Dunedin sevens tournament, in collaboration with the Otago Rugby Union.

After gaining his first degree, he returned to Fijian village Vatulele, on the island of Cikobia, where he had grown up, for his mother’s funeral.

The village had been hit by three cyclones which had destroyed infrastructure, including the wharf on which the village relied for large boats to dock when bringing supplies.

He had since taken on the responsibility of securing the village's economic future, and last December began the rebuild.

"When my daughter passed away, it put things into perspective," he said.

"My daughter and my wife have always been my backbone."

Graduation brought its own challenges.

"I feel good but at the same time I’m sad that she is never going to be there.

"There will be triggers, for sure. It won’t be an easy day."

However, Mr Maiono will have the support of the village, wife Litia and sons Atu (10) and Aseri, his Elim Church family, and wider city community when he crosses the stage.

He has already received strong support, including from his family and the Otago rugby community.

"Rugby doesn’t discriminate. It’s universal, and that’s the best thing about rugby. And the rugby community in Dunedin is just awesome."

He played rugby for the town club, and started working at Tuapeka Gold Print — where he still works 13 years later.

Next year and beyond, Mr Maiono will continue to work to rebuild Vatulele — "a huge job and a huge cost".

His continuing work to foster sevens, including coaching, had helped him deal with challenges in his family life.

"That’s something I can be proud of. It takes my mind off things."

He is comforted to know his daughter would have wanted him to complete his studies and help others.

And he still gains delight from sevens.

"Sevens is my happy place."