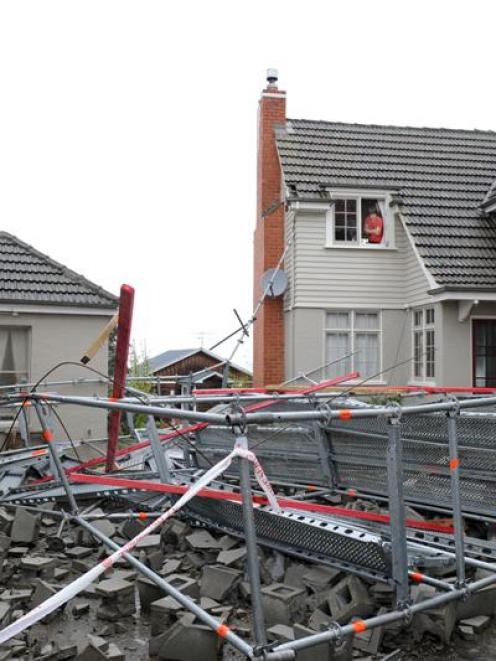 A new Dunedin restaurant faces further weather-related delays because of damage believed to have been caused by the wind. Photo by Stephen Jaquiery.
High winds are suspected to have caused the collapse of a concrete-block wall at the Roslyn bridge restaurant site in Dunedin early on Saturday.

The blocks had been put in place for the first-floor wall but had yet to be filled with concrete.

Part-owner of the restaurant, Roslyn Bridge Ltd director Guy Smith was unaware of the collapse when contacted by the Otago Daily Times yesterday but said strong winds had been causing construction delays.

"We were concerned earlier in the week about this kind of wall having been put up with the wind having been so strong."

Mr Smith's project manager, John Heenan, was also unaware of the collapse yesterday but said the contractors, Clear Construction Ltd, had been instructed to ensure the wall was safe.

"I certainly said to them last week when they were putting it up to make sure it was fully braced over the weekend. It's really the contractor's responsibility."

No-one from Clear Construction could be contacted yesterday.

"Quite common, actually, block walls not filled. They build them up too high without filling them."

The restaurant was due to open by early December. However, Mr Smith said wet weather had delayed the project in the winter and the opening date had become "a bit of an issue".

The $1.2 million, 45-50-seat European-style restaurant will have two decks overlooking the city.