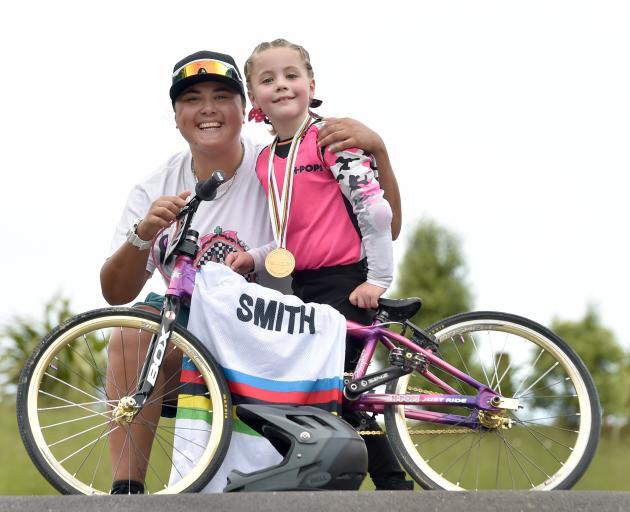 Ready to ride alongside BMX world champion Jessie Smith is cancer survivor Brianna Steedman at the Dunedin BMX Club yesterday. PHOTO: PETER MCINTOSH
Brianna Steedman (7) has always loved BMX, but after a bike accident led to the discovery of a tumour, the BMX community showed some love back to her.

Brianna was diagnosed with cancer in February last year and has been through hundreds of procedures since, including losing a kidney.

Grandfather Richard Shaw said Brianna was at the Dunedin BMX club when she fell from her bike and jabbed herself with her handlebars.

That accident resulted in a trip to the doctor, which soon became a flight to Christchurch Hospital, where she stayed for months.

Brianna had a large Wilms’ tumour, which affected the kidneys.

When members of the Dunedin BMX community found out it "spread through the clubs like wildfire", Mr Shaw said.

They contacted professional riders, who signed their jerseys and sent them to Brianna to raise her spirits.

Those jerseys brought a huge smile to her face and she still took them out today, he said.

One of those riders was multi-world BMX champion Jessie Smith (20), who sent a championship jersey.

Brianna went through chemotherapy and was now in remission and able to take to the BMX course, he said.

Earlier this week, Smith was in Cromwell for some coaching, but wanted to take the opportunity to meet Brianna.

The meeting occurred last night at the Dunedin BMX club.

Smith said Brianna reminded her of a young version of herself, but the young girl was "way stronger" than she had ever been.

"It’s not fair for a little girl to have to go through that."

Brianna said it was cool to meet her hero.

Mr Shaw said Brianna still had a long way to go before she was back to her old self, but it was great she was strong enough to get back on the tracks and continue with the hobby she loved.