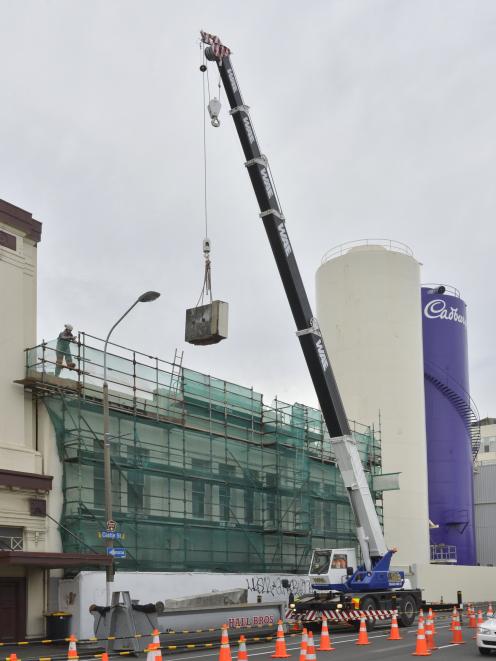 Work has begun to return its Castle St frontage to its former glory.

Before the Cadbury site was sold to the Ministry of Health for the new Dunedin hospital, company owner Mondelez International had been planning to spend $7million to redevelop the old dairy.

It was going to use the building to house Cadbury World, the company's tourist attraction, which it was to move from its Cumberland St location.

The announcement of the sale of the former chocolate factory site to the Government meant the proposed Cadbury World development project became a non-starter.

But Mondelez was keen to continue reinstating the old building's heritage facade.

Australia, New Zealand and Japan area vice-president Amanda Banfield said at the time the sale was announced the company wanted to restore the facade to ensure there was ''a legacy to the amazing 150-year history of food production on the site''.

The Ministry of Health indicated it was willing to consider retaining the facade in the design of the new hospital to ''complement the heritage precinct surrounding the Dunedin Railway Station''.

''Local crafts people are working to restore the street frontage to reflect the proud history of food manufacturing on the site by Cadbury over the last 86 years, and Cadbury Fry Hudson before that,'' Mr Hatton said.

Many heritage features were stripped from the building during the 1950s.

The work being carried out by Cook Brothers Construction involves dismantling the entire existing parapet.

A crane is being used to remove the parapet in sections.

The building's facade will then be restored to a design based on the 1930s Cadbury Fry Hudson era, when the building was the company's headquarters and its main entrance was in Castle St.

Restoration work could be completed by the end of next month.