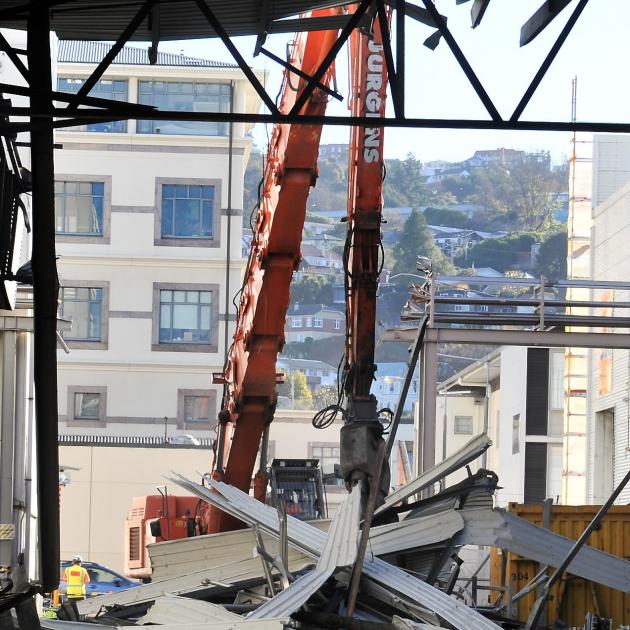 The ministry has sought permission from the Dunedin City Council to demolish almost all buildings on the former factory site for reasons of budget, ease of build and unsuitability to be adapted to use in the new Dunedin hospital to be built on the site.

Consent application documents now under assessment by the DCC said predicted noise levels were conservative and represented the likely worst-case scenario for the various stages of demolition.

"In reality, the predicted levels will not be experienced on a continuous basis for the duration of the project and relief will be afforded to receivers as the levels and locations of activities vary."

Hoardings and screens would be used to mitigate noise, and the ministry predicted excessive noise levels would be 5 decibels higher than the usual daytime street noise of 70dB.

Most affected would be the central police station in Great King St, which would be subjected to a total of up to five weeks’ excessive noise spread over two periods.

The central fire station, Countdown supermarket, the Victoria Hotel and the Anzac apartments would be affected for shorter periods.

Allied Press — housed in the only building immediately adjoining the demolition work — would not experience high noise levels until the section of the factory which formerly housed Cadbury World was demolished.

"Deconstruction will result in noise levels of between 83 and 88dB," the ministry said.

"However, internal noise levels within the building are expected to remain below 50dB."

The Allied Press building was the only one expected to suffer vibrations non-compliant with standards, the ministry said.

Demolition works would be "periodic and temporary in duration" and the Allied Press building would be monitored for the effects of noise and vibration on sensitive working areas, and for "structural and cosmetic damage".

In January, a portion of the historic facade of the Allied Press building fell off. A subsequent engineering report said the incident was a one-off.

Heritage walking tour guide Athol Parks said if cost and convenience were genuine concerns, the ministry could site the largest of the two hospital buildings on the Wilson site to the north.

"The smaller building or buildings could go immediately south of St Andrew St, on the site vacated by the just-demolished Cadbury warehouse building," Mr Parks said.

"Meantime, the remaining Cadbury buildings, which are perfectly functional, could be used — for workers’ accommodation, site management etc.

"It may transpire that the space occupied by those Cadbury buildings is never required for clinical purposes, and in that case, Dunedin will have retained useful building stock which has significant aesthetic and heritage value."

Heritage building developer Ted Daniels agreed that the smaller building should be on the Cadbury site.

"I don’t want to stop the process, but I do want to make sure that what they are doing is best for Dunedin."

Mr Daniels’ preferred option was that the Cumberland St buildings be preserved in their entirety, saying only retaining the facade would not reflect the history of Cadbury on the site.