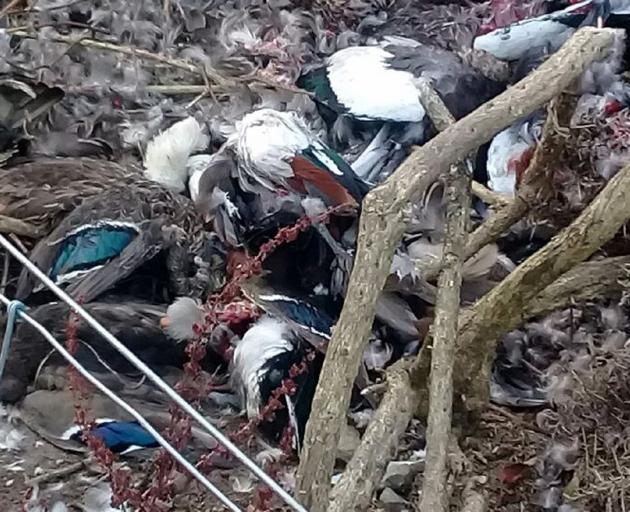 Save Animals From Exploitation (Safe) campaigns manager Jessica Chambers said a member of the public found 15 to 20 dead ducks dumped illegally on Thursday.

The dead birds had been dumped in a rest area where many families stopped and showed how little regard some people had for the animals, she said.

"Every year public spaces are used as an illegal dumping ground for dead birds shot by hunters," she said.

Safe was calling on Minister for the Environment David Parker to ensure a process for reporting the illegal dumping of birds was easily accessible by
members of the public.

It was unlikely the people responsible would be caught or face any kind of punishment, she said.

"The reality is that this kind of behaviour will only stop when bird-shooting is banned. Australia has already banned duck-shooting in three states.

"New Zealand is long overdue for a ban on bird-shooting."

Otago Fish & Game communications officer Bruce Quirey said the dumping showed no respect for the environment or other people.

It appeared someone had taken most of the meat off the birds, but that did not excuse the illegal dumping of the remaining parts of birds.

Calls to ban hunting because of this type of behaviour were unwarranted, he said.

"Fast-food wrappers are often seen dumped on roadside laybys in the same way but we don’t go around saying fast-food restaurants should be banned as a result."

There were 4000 hunters in Otago over opening weekend of the duck-shooting season and the vast majority of them did the right thing, he said.

Any illegal dumping should be reported to the local district council, he said.

So the answer then is to let duck numbers burst out of control? Annual culls are neccessary. Even nature does its own annual culls. In this case it may be people rejecting plucking and cooking tasks before enjoyment of duck meat meals.

Please explain 'out of control'. Are they noxious?

The problem is consumerism and thoughtless waste. I have a real problem with gun availability and encouragement/normalising of shooting wild birds/animals. Defenders of shooting game use the argument that everyone has the right to hunt their own "free" food. But meat is cheap (veges even cheaper) while guns, licences and ammo cost us and our communities dearly.

Call to ban duck shooting after dead ducks dumped? We need to include anything that is illegally dumped.......... ban mattress manufacture as these are often found on the roadside. Not forgetting to ban the manufacture of soft drinks and beer, as their containers are found everywhere. Stop a well known fried chicken outfit because packaging from there is found on the street. Where will it stop ?