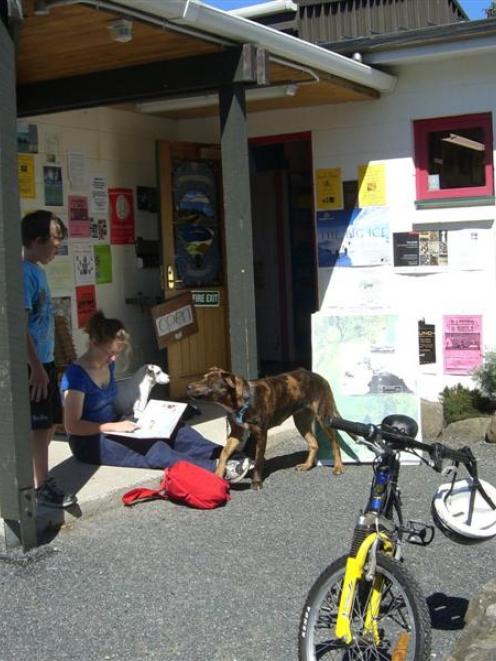 The Dunedin City Council wants to demolish Blueskin Bay Library to make way for a new one. Photo by Louise Booth.
Knocking down an 18-year-old building to replace it with a "green" one makes no sense, Waikouaiti Community Board deputy chairwoman Geraldine Tait says.

Ms Tait will urge tonight's board meeting not to "rubber-stamp" the Dunedin City Council's plan to demolish Blueskin Bay Library to make way for a new one.

A petition with about 80 signatures opposing the demolition will be presented to the board.

The public was not properly consulted on the library plan, which had initially proposed extending the existing library, Ms Tait said.

Many people were not aware the design brief changed last year; just seven people made a submission on the amended plan, six opposing demolition.

Waitati was an active community and the building would be a "fabulous little meeting room" for groups, Ms Tait said.

Waitati resident Rosemary Penwarden could not see the sense in pulling down a "perfectly good building to put up a so-called green building in its place".

Residents had not realised the library was going to be knocked down, as consultation had been inadequate, she said.

A report prepared by Mike Collett, head of Dunedin Public Libraries customer services, to be presented at the meeting, said demolishing the existing building was the cheapest option and the site the best-placed for the new library.

The north-facing site was ideal for energy efficiency, close to the children's playground and Paul Smith memorial, was able to incorporate the present librarian's office and staff workroom into the new library, and would not entail alterations to the entrance of Waitati Hall.

The only listed disadvantage was relocating the library to Waitati School during construction.

Disadvantages of building at the south end of Waitati Hall included the distance to the children's playground, and expensive modifications to the hall's septic tank which lay to the south of the hall.

The council had fulfilled its public consultation requirements regarding the plan, he told the Otago Daily Times.

The design statement from Architectural Ecology included in the community board agenda said the "green" building would be an extension of the hall.

It would use natural ventilation and lighting, energy efficient heat-pumps and electrical fittings, north-facing solar glazing, and insulation to minimise energy use.

All materials would be low-maintenance and from renewable resources where possible.

The Dunedin City Council has set aside $500,000 for the library.