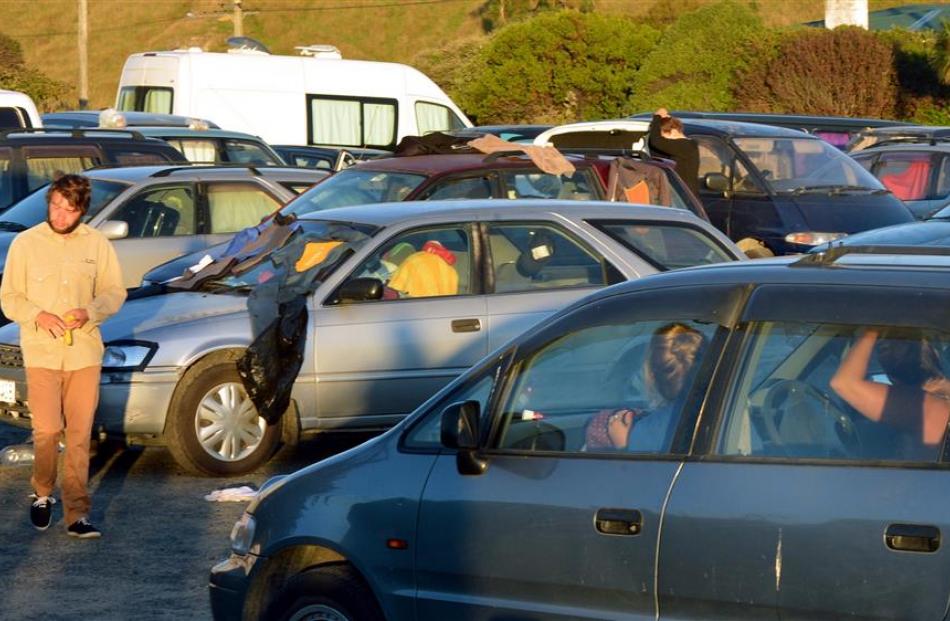 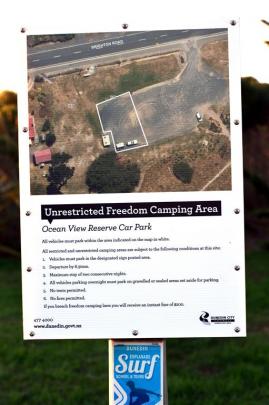 A sign showing the rules of freedom camping at the reserve. 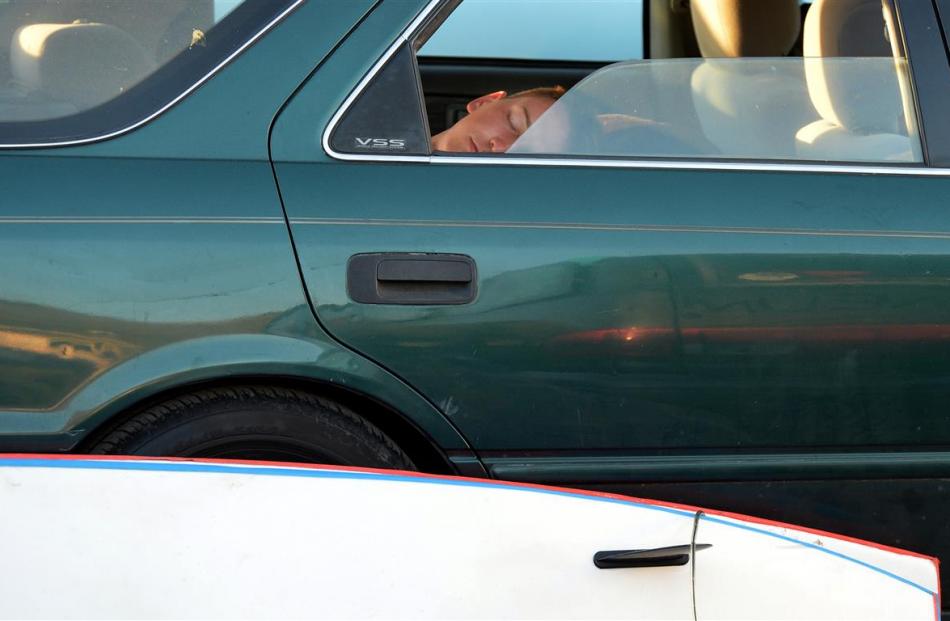 A camper sleeps in his car in the reserve early yesterday.

Tensions are rising in Brighton Rd as reports of more than 30 freedom campers cramming into the Ocean View Reserve become common.

The Dunedin City Council has no plans to change its freedom camping bylaw, despite community concern and more than 280 infringement notices being issued since it came into effect last year.

Residents say the council is not doing enough to overcome the problem and the fines are impotent if rule-breakers are not being moved on.

Since the bylaw - which sought to regulate freedom campers, particularly those in non-self-contained vehicles - came into effect on November 1 last year, 282 fines had been issued.

The most troublesome spots had been the Ocean View Reserve and Brighton Domain, he said.

Local residents were concerned the problem was growing and believed enforcement officers should be moving vehicles on.

At present, enforcement officers were visiting every second night and issuing fines early in the morning and were not speaking to campers.

Of the 282 fines issued, 59 were exempted and 122 remained outstanding. The council was powerless to enforce the $200 fine if campers had left the country, Mr Saunders said.

Brighton Rd resident Mike Courts said the council had been unhelpful when he raised concerns and earlier this week he called police after a naked camper was seen showering in full view of the public.

Vehicles were regularly parking outside the designated area and the council was ignoring his concerns, he said.

"If they stuck to the original quota of seven, I would have been very happy,'' he said.

"Now, it's just a joke. When it's full, cars are all over the place. It's a health and safety hazard. If one of those vehicles goes on fire, what happens?''

He had counted as many as 12 vehicles parked outside the designated area and those within it were side-by-side, unable to leave or move.

"Do you think I would have bought this house if I knew this was going to happen?'' he said.

"When I said to them [the council] how would you feel to wake up every morning to that, they said ‘oh, we couldn't comment on that; it wouldn't be appropriate' - what a load of s... ''

Another Brighton Rd resident said self-contained vehicles were unable to reach the wastewater facilities because of the density of vehicles packed into the car park. While she supported freedom camping, she believed the numbers had got out of hand.

"They have started building up from lunchtime and by 8 o'clock at night it's usually packed,'' the woman, who did not wish to be identified, said.

She believed the limit on the number of vehicles should be enforced again and enforcement officers should move on offenders' vehicles.

Taieri Mouth resident Paula Poutu said the number of vehicles parked overnight in her area had got "crazy''.

"It's getting worse. We even get tents there sometimes.''

Saddle Hill Community Board chairman Scott Weatherall said he shared residents' concerns about the number of freedom campers in the area.

The bylaw allowed freedom campers to stay a maximum of two nights in Dunedin on any council-owned gravelled or sealed land set aside for parking, except in cemeteries, scenic reserves and some prohibited zones on Otago Peninsula, as long as the vehicle was self-contained with a toilet, grey waste and waste capacity for three days.

Limited spaces for non-self-contained vehicles were available at Warrington Domain and in the car park at Ocean View Reserve. However, Ocean View had become "almost too successful'', Mr Weatherall said.

"There are some genuine concerns and I share them. But rather than saying ‘Hey, no more', I think we should be saying ‘If there is that much demand, let's look at other locations as well','' Mr Weatherall said.

He also agreed enforcement officers should be taking steps to move campers on rather than handing out early-morning fines.

He raised the concerns with the council at yesterday's Saddle Hill Community Board meeting, but said "it's not the first time'' he had aired the issue.

Mr Saunders said there was no intention of changing the approach enforcement officers were taking.

"We don't do that [move them along] and there's some reasons; health and safety is one, and, two, they are usually sleeping,'' he said.

He was unconcerned about the number of fines issued this summer and expected the figure to drop as the bylaw became better known.