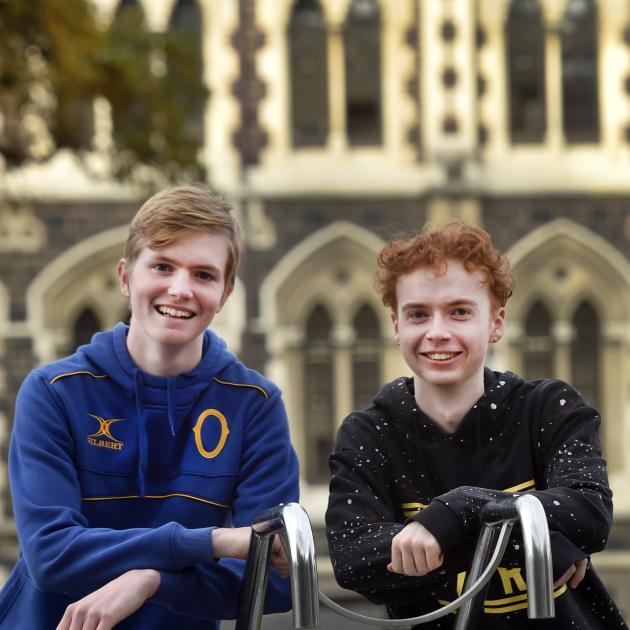 Together at their new place of study are University of Otago students and national top scholars from Dunedin Michael Crosson (left) and Tobias Devereux (both 18) in front of the university clock tower yesterday. PHOTO: PETER MCINTOSH
A pair of Dunedin scholars topped the high school charts and are now tackling their studies at the University of Otago.

Mr Devereux was awarded top scholar in physics and a premier award, along with three outstanding scholarships and a scholarship in technology.

Mr Crosson was recognised as the top scholar in religious studies.

The top scholar prize is awarded to the top pupil in a subject nationally and the premier award is awarded to no more than 12 all-round top pupils around the country.

Both former pupils began their studies at the University of Otago this year.

Mr Devereux said it was "almost unbelievable" to be recognised as one of New Zealand’s top pupils.

It felt weird to think about and he was not quite sure how he achieved it, he said.

At university he studied computer science and mathematics, which were two subjects he had always enjoyed.

He did not have any concrete plans for how he would use the skills after graduating, but was happy to be advancing his learning.

The biggest difference between high school and university was the large amount of flexibility he now had as a student.

Being able to catch up on classes later or go back over recordings meant he could plan things throughout the day, which was a nice change, he said.

Mr Crosson said it was a real privilege to have his efforts recognised at the ceremony at Parliament.

He was the top scholar in religious studies, however, the subject was not even offered at the school.

He took the subject via distance learning and worked on it in study periods with some help from his history teacher.

That style of learning proved useful practice for his university studies, which were completely self-directed, he said.

He was studying law, English and theology, which was proving to be a "healthy challenge" so far.