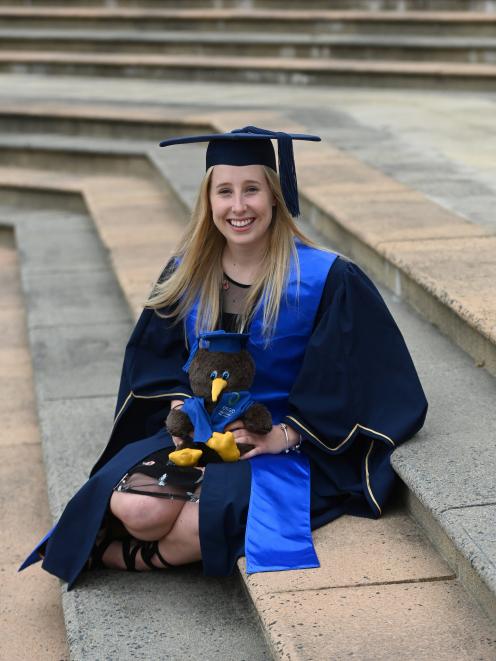 Otago Polytechnic student Ashleigh Smith (21) is graduating today with a bachelor of leadership for change degree. PHOTO: LINDA ROBERTSON
Graduating from Otago Polytechnic after completing a degree in only a year was possible with the polytechnic's Capable NZ pathways, a student being capped today says.

Ashleigh Smith (21), who already has a bachelor of nursing which she received in late 2018, is graduating today with a bachelor of leadership for change degree.

It was "very fortunate" Capable NZ existed, she said. She was "incredibly excited" to be graduating today.

Via the set of pathways, the polytechnic recognised the Naseby woman's background as the founder of anti-bullying foundation Sticks'n Stones, set up in Central Otago.

Ms Smith was also a Queen's young leader award winner, enabling her to undertake a 12-month leadership course at the University of Cambridge.

"I think for me, just speaking from the perspective of being a student at Otago Polytechnic for the last three years, it has just been a really important organisation to be part of."

Otago Polytechnic chief executive Phil Ker has said he has concerns about the future of some of the polytechnic's courses, such as microcredentialling system EduBits and Capable NZ if the Government merger goes ahead.

It was "really important" students' voices were heard in the consultation on the Government's proposal, Ms Smith said.

"It's very difficult for students to understand a lot of the high-level processes around the reform."

She wanted to see how Education Minister Chris Hipkins would help students understand those as "the whole purpose [of the polytechnic] is their education. Students are the reason why everyone's here".

Nearly 1000 people will graduate from Otago Polytechnic today, including more than 370 people attending the 3pm graduation ceremony at the Dunedin Town Hall.