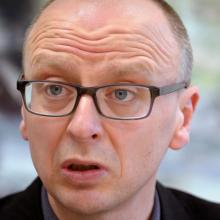 Prof Ballantyne is a University of Otago historian and humanities pro-vice-chancellor, and he was speaking during "Held in Trust: Curiosity in Things", a two-day conference which began yesterday at the Otago Museum.

His talk, on "Cultures of collecting in Colonial Otago", was given to about 60 people at the Barclay Theatre.

Ethnology is the branch of anthropology that compares and analyses the characteristics of different peoples and the relationships between them.

Mr Beattie (1881-1972), initially of Gore, was funded by the then Otago University Museum to undertake a year-long survey of southern Maori communities, and he undertook the work by travelling by train, bicycle and on foot to isolated communities, in 1920.

He developed a wide-ranging interest in the traditional lifestyle and history of the Southern Otago Maori community and produced a wealth of observations, often from Maori kaumatua (elders), before the knowledge was lost.

He had great respect for Maori kaumatua and traditions, but his passion for recording and making lists may also have partly reflected an underlying desire for order, given that four of his eight siblings had died young, Prof Ballantyne said.

A comprehensive collection of Beattie papers detailing Ngai Tahu practices and held at the Hocken Library, had been added to Unesco's Memory of the World New Zealand register last year.

These papers are also cited extensively in the Ngai Tahu Atlas, an online resource which includes original Maori place names.

His historical research was also called on in the Ngai Tahu Treaty claims in the 1990s.

Prof Ballantyne recently said the big collection of materials Beattie gave to the Hocken was "almost certainly the richest collection focused on a particular region held in any New Zealand repository".