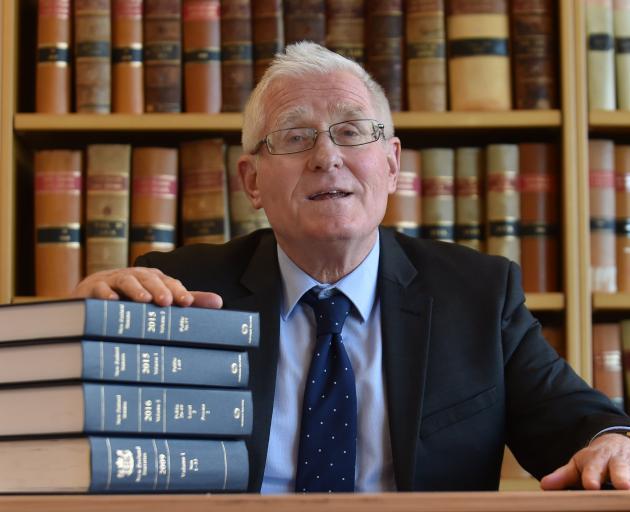 The mother of a former student who stripped and took part in jelly wrestling at one of the now notorious University of Otago law camps says she was disgusted the dean of the law faculty seemed to condone the event.

The woman, who did not want to be named, said she was disgusted when she found out her then 18-year-old daughter had been encouraged to jelly wrestle at the camp in 2012, but even more so when she learnt faculty dean Prof Mark Henaghan was present for part of the camp.

Her daughter had been chosen to take part after losing a game of paper, scissors, rock.

While Prof Henaghan was not there for the jelly wrestling event, his attendance sent a message it was a sanctioned camp, she said.

"Students get up to a lot of stuff, but the fact that the dean of the school was there made it seem like it was sanctioned  by the school."

At the time the woman said she thought about making an official complaint to the university, but decided against it.

Her daughter was not upset about the incident, but 18 and 19 year-olds should not be put in a position to do something they might later regret or what might have an effect on the careers, she said.

"She said everyone was peer pressured to do by other people in her group."

Meanwhile, a former student claims the Prof Henaghan was present when students stripped in a talent quest skit at a law camp.

The woman, who has since finished her studies, told the New Zealand Herald that four girls removed clothing until they were only wearing their underwear with "stars over their nipples" at the camp in 2014.

"They had underwear on their bottom half and the last girl in the line ... she was completely topless," the woman said.

Arriving at the camp and unsure of what to expect, the woman was told that it was a tradition for girls to strip, and for the dean to be present.

"We were all informally told that by the older students," she claimed.

Prof Henaghan was the only staff member from the faculty present at the camp, according to the woman, who claimed he judged a talent quest in which second-year students performed skits.

"Seeing the Dean of Law School present at the height of the debauchery sent the signal, in my opinion, that it was all sanctioned, normal, and that you had no right to be upset by what was happening," the woman claimed.

The University of Otago previously confirmed in a statement that Prof Henaghan had attended the annual camp as "an invited quest".

An investigation by the Herald on Sunday revealed students took part in games that involved binge-drinking and nudity.

The camp has been held for at least the last 10 years and this year's event was due to take place this weekend.

The latest accusations come as the university confirmed today it would be meeting today with Souls (the Society of Otago University Law Students), the group that organises the annual camp, where a decision could be made to cancel this year's camp.

When pressed on whether specific alleged incidents were being investigated, the university told the Herald today: "We are not commenting on individual staff members, as there is a due process to follow when examining concerns received this weekend. Please respect this."

The university confirmed it was examining three issues.

"Two complaints from parents last year, and concerns have been raised in the last two days. These concerns are taken seriously, and will be promptly examined."

The Herald today visited Prof Henaghan's office at the Otago University and was told by his executive assistant that he was not commenting.

According to the former student, the talent quest is one of many activities that second-year University of Otago students took part in at the camp.

Another group at the 2014 talent quest passed around a goldfish still alive from mouth to mouth, until the last person swallowed it then vomited it back up.

The former student recalled another event where male students had to consume large volumes of alcohol and dress up in female clothing before stripping in front of everyone.

"They had to be completely naked. Some guys are fine with that, but I specifically remember the male in my group not wanting to do it - but gave into peer pressure," she said.

The students were told to leave their mobile phones at home and that photography was banned during the weekend.

"You're in the middle of nowhere, you're not allowed your cellphone, what are you going to do if you don't feel comfortable about your situation?" the woman said.

"With the dean being there it felt like everything was being sanctioned and everything was fine, so everyone goes along with it even if they feel really uncomfortable and they're not wanting to do things."

She said that students who tried to avoid challenges were pushed by others and the older students to take part because they "weren't being fun".

When it came to the jelly wrestling competition her group was pressured into taking part - despite refusing to take part more than once.

"The peer pressure got increasingly personal, and the body shaming of a girl from another team ensued," she said.

Targeting another student from a different group, the older students said "she's massive, we need a big girl to take her on".

"We were told that we were ruining the tradition and were no fun," the woman said.

The Herald has spoken to numerous students past and present about the camp with most questioning its appropriateness.

Others spoken to by the Otago Daily Times and commenting on social media said behaviour was not out of line at the ticketed camps and they were not pressured into participating.

The revelations have been uncovered as the culture of the legal profession in New Zealand is under intense scrutiny.

Last week, all six of New Zealand's law schools, including Otago, cut ties with Russell McVeagh in the wake of sexual harassment accusations.

"It's a wee bit infuriating reading the articles with the dean talking about what's happening at Russell McVeagh," the woman who attended the camp in 2014 said.

"All the former law students are talking together being like 'this is such a joke, this is so ironic'."

The woman found the camp so disgusting that afterwards she decided not to attend another law school event again.

"[I thought to myself] this is gross, these are not the people I want to hang out with, this is not what I want to be doing," she said.