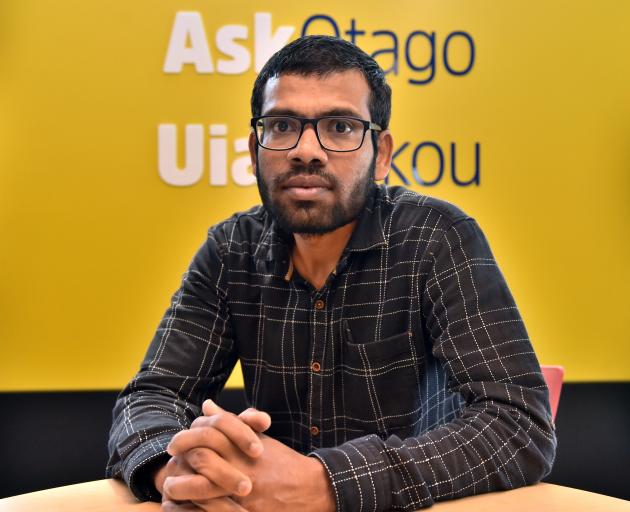 University of Otago pharmacy graduand Younus Mohammad is graduating this weekend, but his wife cannot attend.PHOTO: GREGOR RICHARDSON
A PhD graduand who has pushed unsuccessfully to get his new wife into the country for his graduation tomorrow says the day will fall a bit flat without her — but it has to go ahead.

University of Otago pharmacy student Younus Mohammad said after providing numerous documents to Immigration New Zealand, including more than 20 wedding photos, he was disappointed to hear on Wednesday afternoon that his wife’s visitor’s visa would take two more weeks to process.

Mr Mohammad was grateful for an offer by the University of Otago to move his graduation date changed to May; however his newly-wed wife Sameha Tharannum, living in India, had her own exams then so that would not be possible, and he would be attending the original ceremony at 4pm tomorrow.

Mr Mohammad’s doctorate is the culmination of five years of study at the university, and he will walk across the stage at the Dunedin Town Hall tomorrow along with graduands from the departments of dentistry, medicine — excluding MBChB students — and medical laboratory science, as well as other graduands from the pharmacy department.

Phone calls from MP David Clark’s office to Immigration New Zealand had also failed to speed up the visa process, and Mr Mohammad had no family in New Zealand to attend the ceremony.

However he would still have peers in his department and his supervisors — whom he described as his "extended family" — and he was pleased with what he had accomplished.

The visa was originally applied for in October. INZ has said Ms Tharannum initially intended to travel to New Zealand to live with her partner, and it was not until after it was lodged the need to attend the graduation was raised, contributing to the delay.