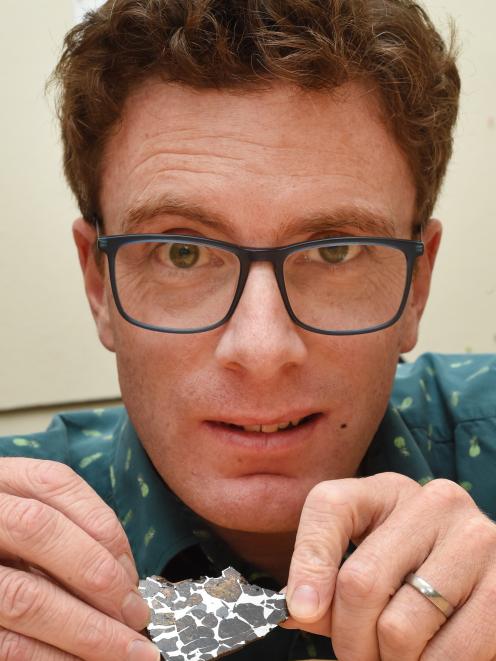 Dr James Scott, of the University of Otago, holds a 5cm-long piece of pallasite meteorite, which is about 4.5billion years old, much older than rocks on Earth's surface. The silver areas came from previously molten iron-nickel and the dark areas are olivine crystal. PHOTO: GREGOR RICHARDSON
Scientific detective work into meteorites is shedding new light on the ancient processes that led to Earth being formed, geologist Dr James Scott says.

Meteorites are parts of meteors that have fallen to Earth's surface.

"These special rocks breach Earth's atmosphere in a range of sizes, from the common minuscule micrometeorites that anybody can find with the use of a magnet and a microscope to rare giants that reshape Earth's biology, such as the about 10 km-wide bolide [a very large impactor] that collided with Mexico 65 million year ago and terminated the dinosaurs," he says.

Dr Scott, of the University of Otago geology department, has a 5cm-long fragment of a polished pallasite meteorite, a type of meteorite comprising roughly equal proportions of iron-nickel and a crystal, olivine.

Planetesimals - solid bodies 1km across or larger - play a key part in planet formation, including by being drawn together through the pull of gravity.

This particular meteorite was likely to have come from within a planetesimal of up to about 500km across, and about 200km below the surface, near the boundary between the iron-nickel core and the subsurface mantle.

The meteorite had reached Earth after the planetesimal had split up from a collision with another body.

"Relative to their size, there's a lot of information can be gleaned from these things," he said of the meteorite fragment.

Studying meteorites had contributed hugely to "our knowledge about the material that formed the solar system, the sun, planets and moons".

Meteorites were of three main types: iron meteorites formed from the iron-nickel cores of ancient planetesimal bodies or large asteroids that had been split apart by collisions; combination stony iron meteorites; and chondritic stony meteorites.

Other collaborative research he had undertaken on aspects of solar nebula condensation gave "a new perspective" on the material that later formed our own planet, he said.