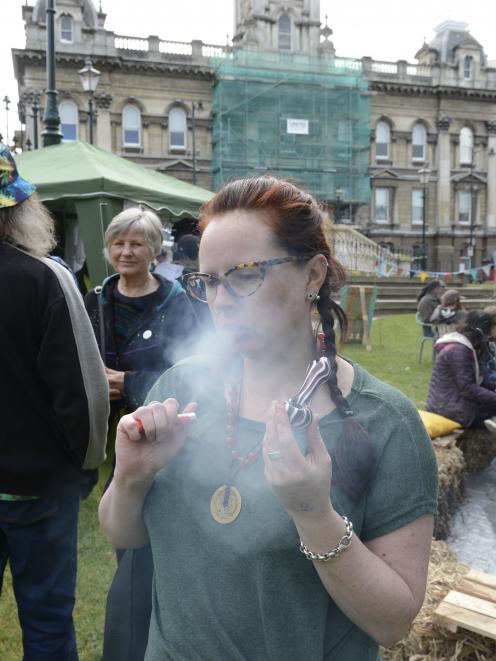 Whakamana Cannabis Museum acting manager Angela Gardiner smokes cannabis during J Day in the Octagon on Saturday. Photo: Gerard O'Brien.
The message is blunt - let cannabis users smoke without the fear of harm from its prohibition.

People smoked cannabis at J Day events in six New Zealand cities, including Dunedin, between noon and 4.20pm on Saturday.

Most of the people who attended the event in the Octagon had smoked cannabis, she said.

''We want people to be able to come together and meet other cannabis users. All around us are pubs but there is nowhere for cannabis users to go, hang out and meet each other - social connections are important.''

She wanted people to stop judging cannabis users ''for their choice of intoxicant''.

''Cannabis is much safer than alcohol so why are we trying to stop people using it?''

The event was hosted by Otago Norml and the Whakamana museum.

A police spokeswoman said there were no reported incidents or arrests in relation to J Day in Dunedin.

The role of police was to enforce the law and the police approach to cannabis had not changed, she said.

''Police officers do, however, have discretion on how they deal with a range of matters, including cannabis offences, on a case-by-case basis.''