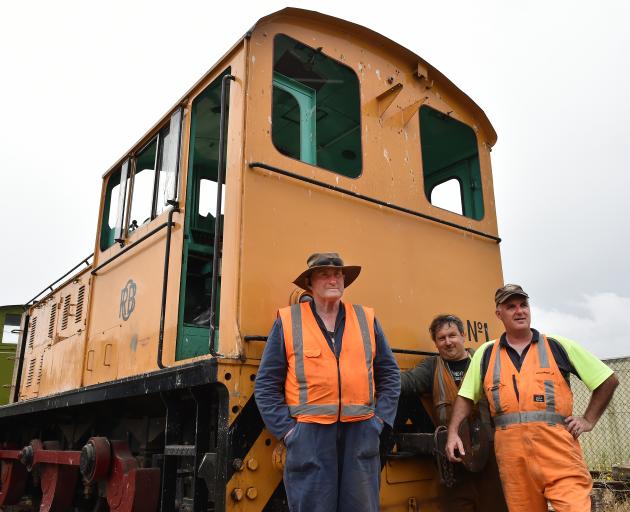 It took a two years of planning to get it here but (from left) Billington Transport owner Neville Billington, Ocean Beach Railway member Shaun Beckett and general manager Mike Kilsby stand in front of a 1967 Mitsubishi locomotive trucked from a storage shed in Wairio to Ocean Beach Railway in Dunedin yesterday. PHOTO: GREGOR RICHARDSON
A rare piece of Southland's rail history has a new home in Dunedin.

Rolling stock from the Ohai Railway Board - a 1967 Mitsubishi locomotive and an 1886 F11 guard's van - were trucked from a storage shed in Wairio, near Nightcaps, to Ocean Beach Railway yesterday.

They have been sitting in a storage shed for about 30 years.

Ocean Beach Railway general manager Mike Kilsby said the rail vehicles were owned by the Southland District Council but the railway had a long-term lease on them, so they could be restored.

Only two locomotives were bought by the railway board and the other one was in Wellington, he said.

"It's a rare bit of Southland rail history from a once significant private railway."

It would take about 18 months for the locomotive to be restored and returned to service and the guard's van was being stored on behalf of the National Railway Museum.

Apart from the bird waste which had piled up over the 30 years the locomotive was storage, it was in "mint" condition.

"On its last day it was driven into a shed and that's where it's been for the past 30 years. It's never had a night outside since it was built."

Transporting the two rail vehicles from Wairio took a bit of planning and clever thinking, he said.

"It's taken about two years of planning and Neville Billington from Billington Transport has done a marvellous job to get them here."

The Southland Trust had given money to the railway for the restoration project.