Cargill Crusher victor ‘all bloodied up but didn’t stop’

Cargill Crusher winners Sharon Lequeux and Adam Keen are held aloft at the end of the 24-hour endurance running challenge. PHOTOS: GERARD O’BRIEN
For most people the equivalent of climbing Mt Everest in 24 hours would not be a "training run", but 2019 Cargill Crusher winner Adam Keen has greater heights to scale.

The winner of this year’s annual 24-hour race — in which he ascended and descended Mt Cargill 17 times — said he got off to a quick start, unexpectedly getting himself on track to break the race record for distance travelled.

What made the Queenstown man’s achievement all the more remarkable was that about four hours into the race he tripped, fell heavily and badly grazed his limbs and back.

"The race was pretty brutal, as you would imagine, but I also had what was probably my worst tumble I’ve ever had.

"I was all bloodied up but didn’t stop and tried not to think about it too much."

Mr Keen has competed in the race every year since it began three years ago, completing eight ascents in his first attempt before doing 12 last year.

"I pretty much kept going non-stop this year, apart from a couple of minutes’ break after each summit," he said. 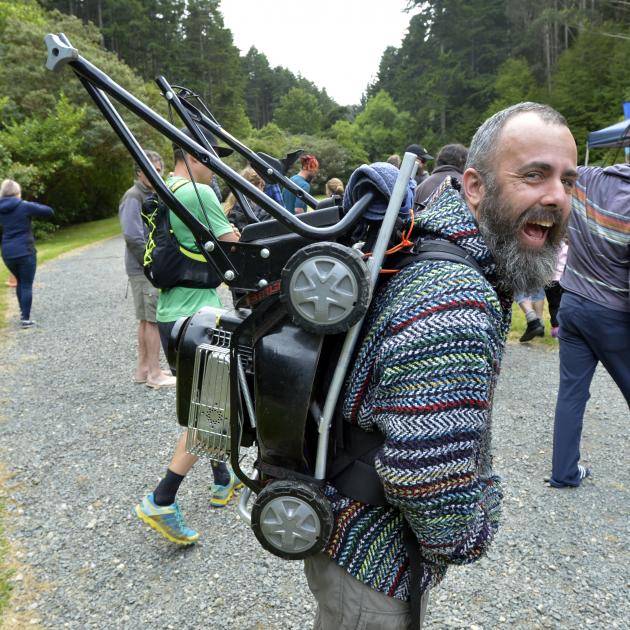 Andrew Glennie carted a lawnmower on his back while completing four laps in the Cargill Crusher endurance run.
Over 24 hours, Mr Keen climbed a combined 9700m, nearly 1000m more than the altitude of Mt Everest.

After his bumps and bruises have healed, he plans to take on January’s Ultra Easy mountain run, up and down peaks surrounding Wanaka.

Mr Keen’s ultimate target is the Riverhead Backyard ReLaps Ultra in Auckland in April, a "last man standing" contest which continues until the final runner completes a 6.7km lap.

"I did three Routeburn Tracks this week as well, so I’d done a 100km before I even started Mt Cargill."

The women’s race was won by Sharon Lequeux, who completed 15 laps of the course.

Meanwhile, and surely in a category all of his own, Andrew Glennie ran four laps of the course with a lawnmower strapped to his back.

Race organiser Steve Tripp said about 100 people took part in the race, an annual fundraiser for the Valley Project.