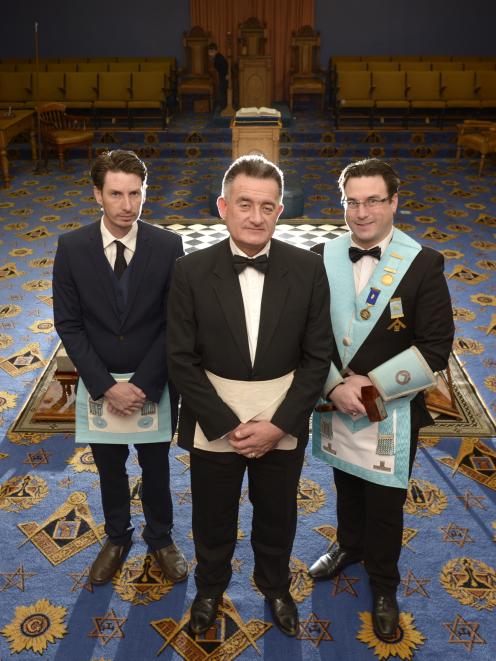 On the encouragement of his sons Daniel (left) and Jonathan, Chris Laird has recently become a Freemason. Photo: Gerard O'Brien
Two brothers who initiated their father into freemasonry at a ceremony in Dunedin this week say they are thrilled to be able to bring him into their world.

On Tuesday night, brothers Jonathan and Daniel Laird initiated father Chris as a freemason at a ceremony at the Dunedin Masonic Centre.

Jonathan, who is master of Dunedin's Hiram Lodge No 46, said the ceremony was doubly special because his father had a stroke four years ago which nearly claimed his life.

He underwent high-risk surgery removing almost half of his skull, which was frozen and put back six months later, and had been given less than a 50% chance of survival.

''He was knocking on death's door. We almost lost him,'' Jonathan said.

''To have him able to travel and to participate ... for me and Daniel was a massive thing.

''It was nice to be able to bring him into our world.''

Mr Laird said his sons had been the catalyst for his decision to join freemasonry, but it was a natural step given his interest in history and the spiritual side of life.

''All of my life I've been interested in the unusual.''

Daniel said freemasonry had helped him grow personally, and learn skills such as public speaking, but had also helped him understand the world.

''It's not until you step inside a lodge that you understand its connection to the world we live in.''

Father's initiating sons, is pretty common in Freemasonry, but it's not often, the roles are reversed, particularly with two son's initiating a father. A great night was had by all, and the Hiram Lodge No. 46 would like to thank the Otago Daily Times for sharing our story.