Centenary of piping cause for celebration 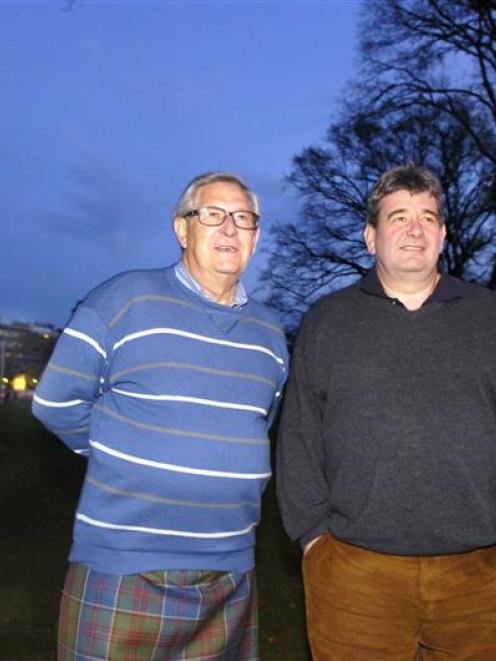 Scottish piping judges Tom Speirs (67) and Colin MacLellan (49), who together have more than 100 years' experience as pipers, are enjoying their first visit to Dunedin. Photo by Jane Dawber.
A few pipers may be missing, but lovers of Scottish culture will be in for a treat when a centenary of piping and dancing is celebrated in Dunedin this weekend.

This is the first time two piping judges have been brought from Scotland to adjudicate at competitions organised at the Otago piping and dancing centre.

The Piping and Dancing Association of New Zealand was established in Dunedin on September 3, 1908; Otago, Southland and Canterbury being the founding centres.

Otago president Craig Peterson said the Otago centre was proud to be hosting the national open solo piping championships and the 18-years-and-over highland and national dancing championships during the weekend festival.

He had initially hoped to celebrate the anniversary with 100 pipers, but he was pleased the event had attracted 71 pipers and 177 dancers.

"They are the top pipers and dancers in the country," he said.

The official opening was held at the University of Otago College of Education auditorium last night.

Piping and dancing events started in the auditorium last night and will continue there and elsewhere in the college complex in Union St today and tomorrow.

Members of the public were welcome to attend, with a modest entry charge payable, Mr Peterson said.

Mr Speirs, who has been piping for the past 60 years, said he and his fellow judge, Mr MacLellan, were "very honoured" to participate.

Mr MacLellan (49), who has been piping for more than 40 years, said Dunedin was a "lovely" place and he had been "very interested" to learn more about it.

The bagpipes were demanding instruments and were "easy to play badly", Mr Speirs said.