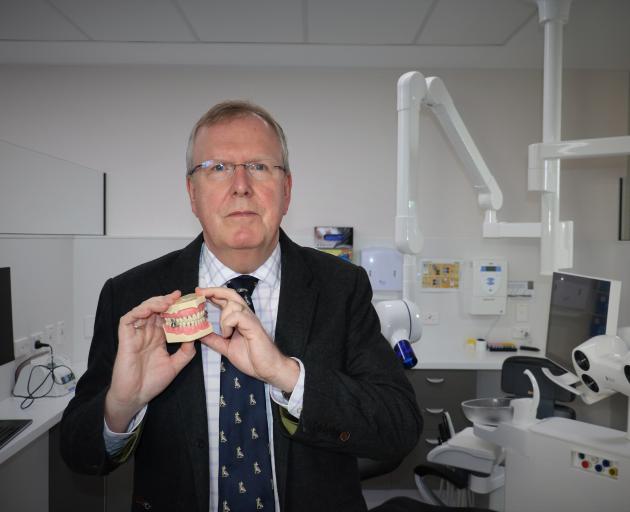 University of Otago Health Sciences Pro-Vice-Chancellor Professor Paul Brunton with the weight loss device. Photo: Supplied
The researcher behind a weight-loss device which has been condemned around the world says his invention has been misunderstood.

Lead researcher and University of Otago health sciences pro-vice-chancellor Paul Brunton said yesterday some of the feedback he had received had been "hurtful", but he did not want to dwell on the negative.

"There has been quite a lot of positive feedback. Unfortunately that has not come to the fore."

The intention of the Dental- Slim Diet Control - which is fitted to the upper and lower back teeth and uses magnets to stop the wearer from opening their mouth past about 2mm, restricting them to a liquid diet - had been misinterpreted, he said.

The device was only intended for use under specific circumstances and strict medical supervision, Prof Brunton said.

It would not be available to anyone as a general weight-loss tool, but would be prescribed by a medical professional.

"I think people have misunderstood, unfortunately, our intention and the nature of the research itself." 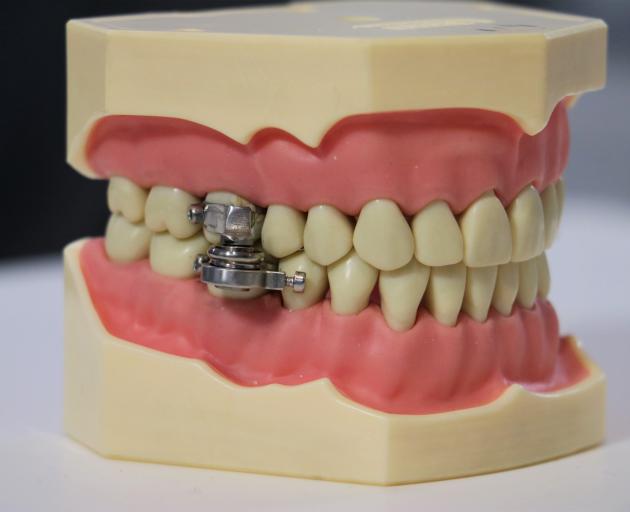 The dental device is fitted to the upper and lower back teeth and uses magnets to stop the wearer from opening their mouth past about 2mm. PHOTO: SUPPLIED
News of the device, developed by University of Otago and United Kingdom researchers, was released earlier this week.

It was described as a "world-first weight-loss device to help fight the global obesity epidemic" and it was noted "participants in a Dunedin-based trial lost an average of 6.36kg in two weeks and were motivated to continue with their weight-loss journey".

It was met with a spate of negative feedback, including in a Washington Post article in which nutrition and eating disorder experts called it "barbaric" and "concerning".

People took to social media comparing it to to the practice of jaw-wiring, which was popular in the 1980s, and calling it a "medieval torture device" and "fat-shaming".

Others raised the issue of damaging people’s relationships with food.

Prof Brunton said use of the device would also be coupled with support and advice from a dietitian, which was what happened during the trial.

"People will not be forced to use it - it’s a choice - and it’s a decision that a person would be able to make for themselves in consultation with medical professionals."

An example of how the device could be used was when severely overweight people were told they could not have surgery until they lost weight.

The pilot study only involved six patients and there would need to be "much more" research before it became available, Prof Brunton said.

When asked if he regretted the way information about the device was communicated, and whether its intended use could have been clearer, Prof Brunton said "hindsight is a wonderful thing".

"I think it just has been misinterpreted."

"People have clearly not read the paper," Prof Mann said.

He was also disturbed by the "inappropriateness" of some of the comments.

There were "unquestionably" health consequences from obesity, which was driving the diabetes epidemic.

There was evidence of weight loss resulting in remission of diabetes, which was an example of when the device could be used.

When asked about the nutritional risks of a restricted liquid diet, he said the liquid diets available now, compared with many years ago, were well balanced nutritionally.

They were not recommended long-term, but were perfectly nutritionally adequate for a short period.

He said the issue of people’s relationships with food was not something "peculiar" to the device.

"Even if I feel that I want to lose a couple of kilograms, I have to deal with my relationship with food."

This remains incredibly problematic regardless of what is claimed.. The fact that there has been mass criticism and upset from the fat community and he's doubling down is upsetting. These are the people you claim to want to help, maybe actually talk to them, listen, find out what fat people actually need/want cause honey, it ain't this..

Except for the six *volunteers* who *volunteered* for the study and who were *all* happy with its outcomes?

There has been at least as much criticism from the average, no need or desire to lose weight, community bravely opposing the provision of this optional aid to losing weight.
It's not necessary because they can use willpower - sure. It's that easy! Do these critics think people who can lose weight when they want to will choose this device instead?
On RNZ National a woman criticised it, saying it wasn't necessary before bariatric surgery and she knew because she'd had the surgery. Naturally she either hadn't been seriously obese, or had been able to lose weight because of her willpower!
The critics talk as if it is a fat-shaming torture device. They rave on as if it would be imposed on people who don't need to lose weight for their health. Perhaps they are imagining women who would like to lose a couple of kilos to look stunning in their wedding photos.
I'm astonished at the reaction, the misplaced indignation, the lack of recognition that some people - no, not everyone over their ideal weight for height - suffer health conditions that are directly related to excess weight. Don't they want everyone to have access to means for helping them live healthy lives?

The "fat community"? Hardly deragtory you think? "These people"? Sounds like a member of the Klu Klux Klan in the 1960s talking about the black community. Does the fat community have a spokesperson? A leader? An agenda? They want reperations for being fat? It's the attitudes of people like you that make people fat to begin with. Stop catagorizing people by imutable characteristics like how they look! Fat community...now that's dehumanizing, more so than the idiotic device.

No Professor Mann, a lot of us have read the paper and are well qualified to critique it. The first thing I notice is that it has no control group - a group of people simply given the liquid diet. Yet on the front page of the article, in the "key points" it says the device promotes weight loss. Talk about misleading! The team has failed Science 101. Unbelievable, and embarrassing for those at the uni who do rigorous, well-controlled science.

The "control group" is all the people who were on liquid diets and every imaginable diet for losing weight, who did not lose weight. Not because of the liquid or solids they were supposed to be ingesting in place of their usual foods, but because they could not stick to the weight-loss diets. The device is not a substitute diet, it is a willpower add-on for physically preventing lapses in self control. It is not a permanent solution to overweight. It is a helper for those who need and want it. Changing one's diet habits is hard. The device *may* even make permanent change occur, e.g. the weight-loser develops a more realistic feeling of "I'm full enough now" and "That's too sweet" leading to preference for smaller helpings and less sugary food.

Hell of a lot safer and cheaper than bariatric surgery.