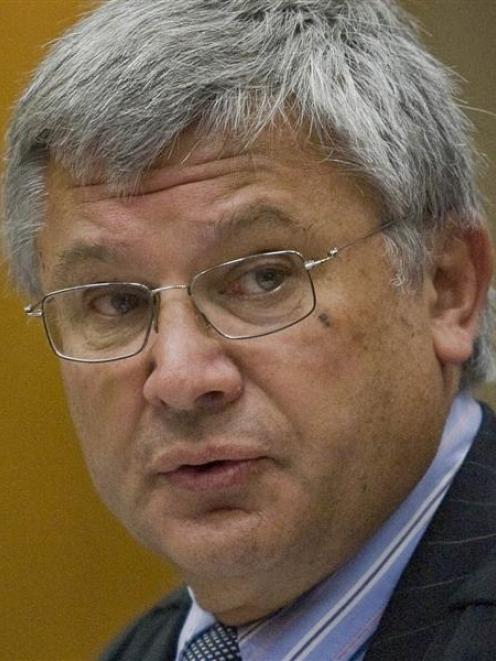 Robin Bates.
A Dunedin Seventh Day Adventist Church pastor and several of his congregation lost $850,000 to a fellow church member, who falsely claimed he had $35.8 million owed to him from a Nigerian oil contract, a Dunedin District Court jury heard yesterday.

Damas Tutehau Flohr (69) persuaded the pastor and his wife, two other couples and four individuals to advance him $853,000 when he was having financial difficulties, Crown counsel Robin Bates told the jury.

None of the people knew about the others providing the accused with funds and none had been repaid, Mr Bates said.

A government employee involved in the research and analysis of scams described court documents relating to the accused's claims as ''obviously scams'' or having ''all the hallmarks of a scam''.

It was ''inconceivable'' any individual would receive a letter stamped ''urgent'' from the Federal Reserve bank because it did not hold funds for individuals, he said

Flohr is on trial before Judge Michael Crosbie and a jury on seven charges of causing losses by deception.

In his opening summary, Mr Bates said the Crown alleged Flohr obtained the funds by deception and had, ''on numerous occasions'', made false representations to the victims.

These included claims he had $US30 million due from an oil contract in Nigeria, money available in the US and UK and property interests in Tahiti that he could sell to cover the funds if necessary.

The Crown said the accused intended to deceive through his stories, which were not, and could not be, correct; that he had represented various ''materially false'' scenarios which he knew were false; and, as a result of his representations, losses occurred.

Mr Trevena, a Seventh Day Adventist pastor in Dunedin from early 2002 to 2009, had known of the accused since the 1960s when he was at Longburn Adventist College in Palmerston North.

Mr Trevena was in England in 2007, when Flohr contacted him, asking for money because of financial difficulties.

Between October 2008 and December 2009, Flohr asked for several other amounts and Mr Trevena and his wife ultimately gave the accused $246,519.31, none of which had been repaid.

Other funds came into Mr Trevena's bank account as arranged by the accused, or by the accused turning up with significant amounts of cash, which he asked Mr Trevena to transfer to other places - mainly Nigeria - through Western Union.

Another witness, Evelyn Wordsworth, who had met Flohr at college in the 1960s, paid him $305,000, her understanding being all the funds were sent to Nigeria, Mr Bates said.

Ms Wordsworth later began having concerns about what was happening. She thought it sounded like scams and began making inquiries.

She contacted some of the businesses and banks Flohr had mentioned and asked about documentation.

She was told it was not correct.

When Ms Wordsworth confronted him and said what he was doing amounted to scamming, Flohr was ''not interested'', Mr Bates said.

He claimed to have met some of the people involved, including the ex-president of Nigeria, who was ''like a father'' to him and regarded him as a son. After several of the complainants became aware of the situation, they went to Ranfurly, where the accused and his wife had moved from Dunedin.

They confronted him and asked for their money back.

Flohr said he did not have it, although some money - about $1 million - had arrived with an ambassador.

But the ambassador had been turned away at the border, he said.

The trial continues today, when Mr Trevena will give evidence under cross-examination by defence counsel Max Winders.