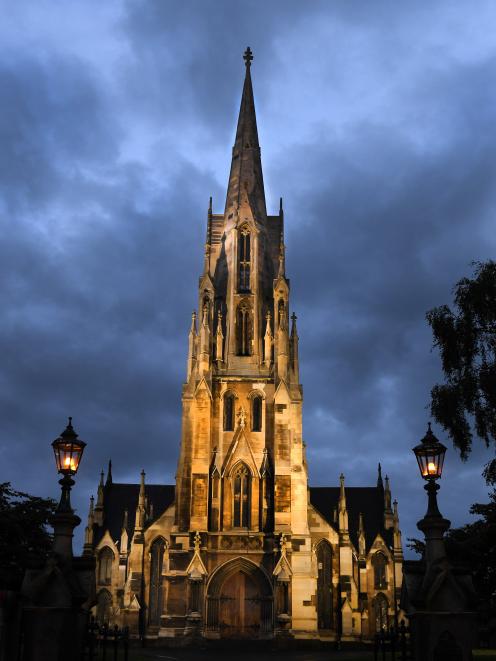 The First Church of Otago is lit up in all its glory at night, by two new powerful LED lights. PHOTO: STEPHEN JAQUIERY
Let there be light — no-one said it aloud, but nearly everyone was thinking it, as the First Church’s new outdoor lights were switched on in Dunedin recently.

"The new floodlighting of the church has to be seen to be believed.

"The new LED lighting not only lights up the spire with dramatic effect, the lights also light up both sides of the church.

"The whole thing’s come alive. It shows off all the architecture in all its grandeur."

Previously, the outside of the church was illuminated by two vintage spotlights from World War 2, which were installed in 1948.

Mr Stevely said the spotlights failed several years ago, but McArthur and Symons owner Evan Rees came to the rescue and replaced them with the LEDs.

"It was quite a mission because the old control box and meter box had totally disintegrated with age," Mr Stevely said.

"So we had to get something made specifically.

"It’s been a fantastic labour of love.

Two new lamps were also mounted atop the gate pillars at the main entrance to the church, in Moray Pl.

"You will note that the two lamps mounted at the main entrance gateway now have candle-like bulbs operating — really most effective and eye-catching.

"A long time ago, they were gas-operated. Farra Engineering did an excellent job restoring both of the lamps."

Mr Stevely said rather than send the World War 2 spotlights to "the scrap heap", they would be given to the restorers of the disappearing gun emplacement at Taiaroa Head.

Wonderful project and much appreciated by heritage lovers in City Rise.