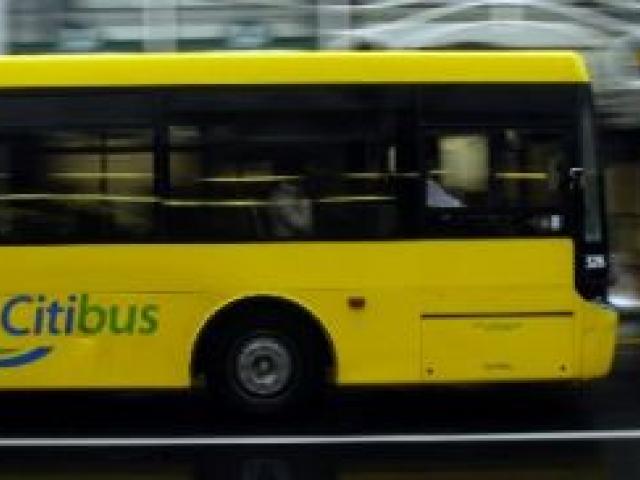 A Citibus makes its way along George St, Dunedin. Photo by Craig Baxter


Drivers at Dunedin City Council-owned bus company Citibus are in "limbo", waiting to learn if their jobs will go and if the company will be sold, but their fate could become clearer later today, the union representing them says.

New Zealand Tramways Union president and Citibus driver Bill Simpson said yesterday he would be meeting Citibus management later today to discuss the possible loss of up to 10 drivers' jobs.

Management had indicated last month up to 10 jobs would have to go at the underperforming company, and it was hoped the drivers' futures would become clearer today.

"We've got a lot of worried men down there."

The news came after the Otago Daily Times reported on Tuesday the council had discussed selling Citibus at last week's non-public meeting.

The company has lost $806,000 in the past two years, owed the city council a further $4.05 million by the end of last year, and lost several Otago Regional Council (ORC) contracts to Auckland-based rival Ritchies Transport last month.

However, Mr Simpson said he blamed the ORC - rather than Citibus management - for the company's predicament, because the ORC took the lowest complying tender when distributing bus route contracts.

He claimed Citibus had missed out to Ritchies by just $650 a year, and the small difference meant up to 10 Dunedin workers would lose jobs.

"There is a certain level where companies are either going to go down, or have to cut out on maintenance and everything else, or they're going to run at a loss.

"They [ORC] want a Rolls Royce service on a banana budget."

"In the end, you've got to get best value. There's huge ratepayer and taxpayer money goes into these things.

"People can like it or lump it. There is just sound processes operated and that's the way it should be."

He couldn't say last night whether Mr Simpson's claim about tender price differences was accurate, but "I don't recall anything that close".

DCHL is the council's parent company for a group including Citibus and five other companies.

Mr Simpson said he had been unaware the sale of Citibus was to be discussed last week until it was reported in the ODT on Tuesday.

The union had 60 members within the company, and Mr Simpson said he still didn't know if his own job would be safe.