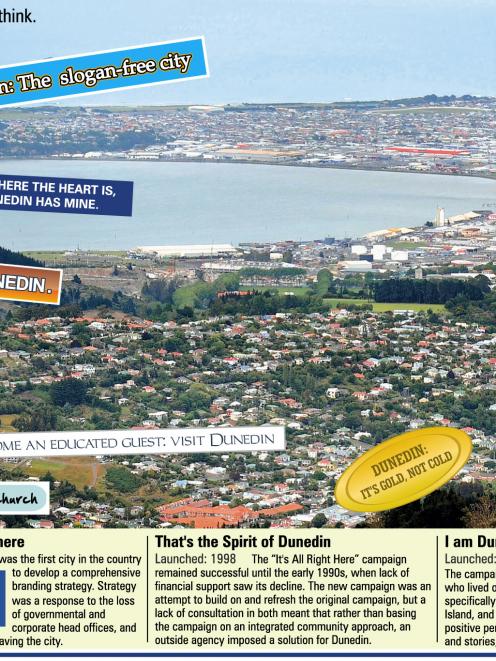 Dunedin's plan to develop and launch a new brand for the city has sparked a strong city-wide response, and the search is now on to find the "essence" of the Dunedin experience to promote the city to the rest of the world.

But a University of Otago academic with expertise in the field of branding has warned any new brand, or slogan to go with it, must be a realistic portrayal of how locals feel about their hometown, or it could be seen as little more than "hype".

An Otago Daily Times call for people to come up with their own slogan for the city netted more than 130 by yesterday afternoon, with many more turning up on various internet sites.

The call came after the Dunedin City Council announced on Monday its "I am Dunedin" marketing strategy, developed in 2001, had ended.

Expressions of interest were being sought by the council from creative agencies to develop a new brand strategy for the city, and the council was collaborating with key stakeholders to develop a city-wide promotional strategy.

Council marketing team leader Jennifer Hooker reiterated yesterday a slogan or catch phrase would not necessarily be part of the brand.

The responses to the ODT ranged from the humorous, including "Dunedin: Hang on to your pants", to the more serious, such as: "Delicious, delightful, dramatic Dunedin" and "Become an educated guest: Visit Dunedin".

It also provided some with an excuse to take a crack at the council, including: "Dunedin: Highly rated".

Some objected to the idea of having a slogan at all, with one suggesting: "Dunedin: The slogan-free city" as the slogan.

University of Otago department of marketing senior lecturer Robert Aitken said the brand for a city or town had the same principles as any other brand.

"The most important thing is that it's a promise of a certain type of experience."

But, particularly with place names, the experience had to match the promise, and be a realistic portrayal of the way a place felt about itself.

The ideas in the brand had to be "owned" by locals, in the same way aspects of the city's culture, like the "Dunedin sound" in music, were.

Dr Aitken said the idea of including local stakeholders in planning the brand was a good idea for those reasons.

His view of Dunedin was it had the potential to be "a really creative hub"; the centre of small networks of innovative, creative people.

Success in place branding could result in brand names as well known as "the Big Apple" for New York.

But not all were successful, he said.

"The local ones, they're pretty naff, most of them."

Ms Hooker said the marketing strategy would be used to promote Dunedin as an attractive place to live, work, study and do business, and to stimulate the economy, as well as social and cultural growth.

The council hoped to attract new residents and visitors to the city.

Ms Hooker agreed "absolutely and totally" the brand had to ring true with residents.

People in Dunedin should be able to hear the message and think, "That's right about us".

"It has to have the true essence of Dunedin: what we're all about."