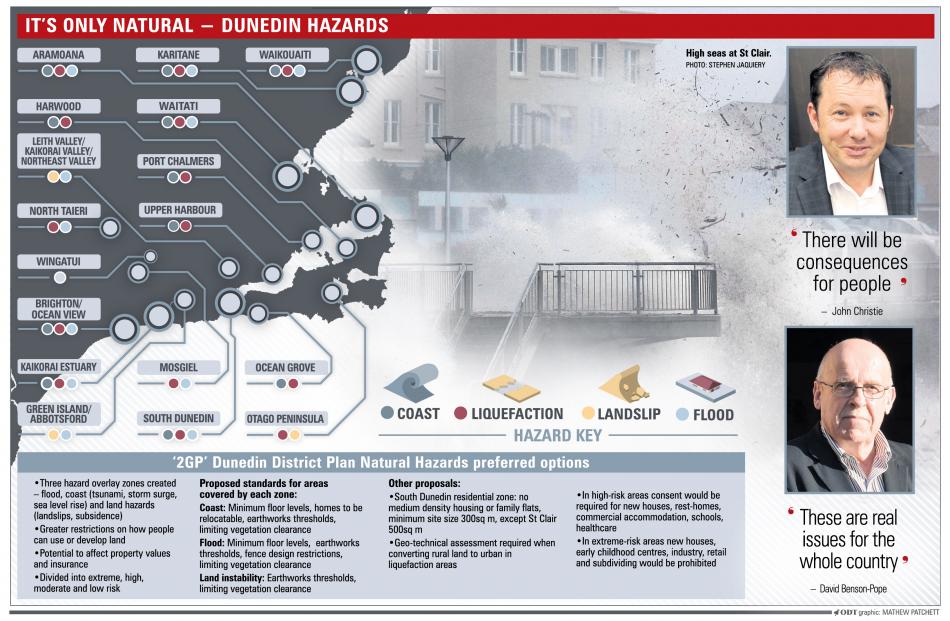 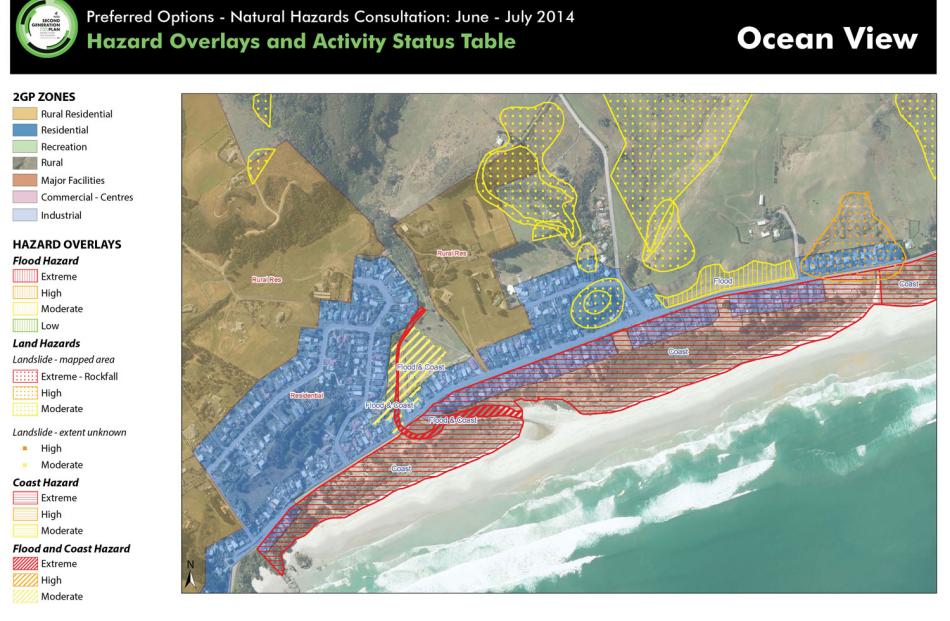 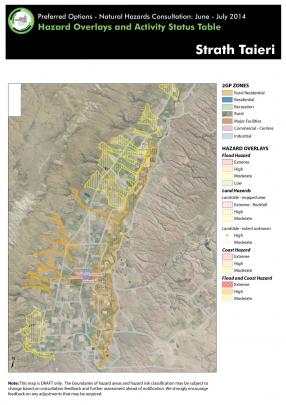 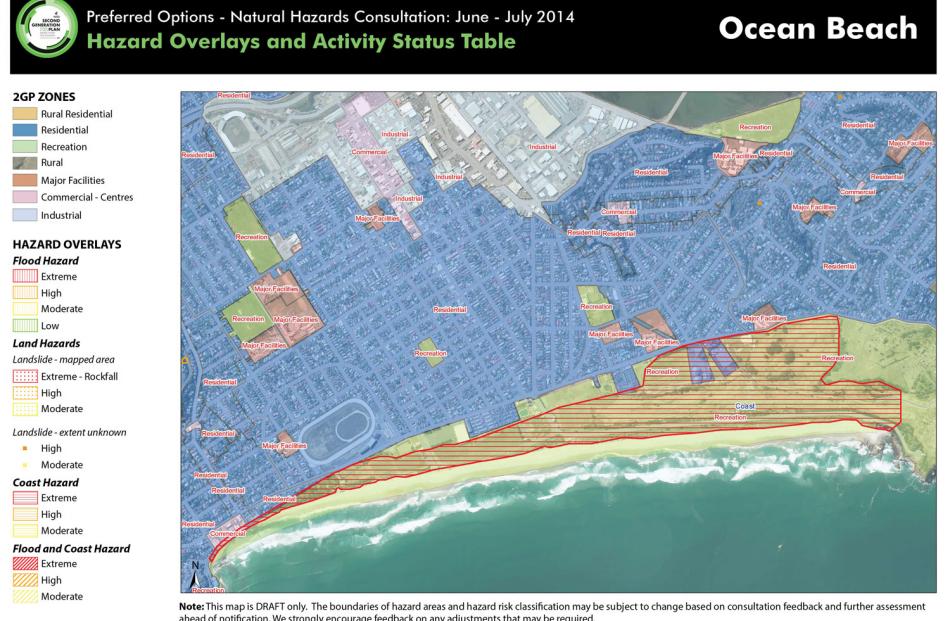 Proposed new rules on natural hazards that could affect thousands of Dunedin properties have largely been welcomed, despite concerns some owners will be left out of pocket.

The proposals, which would ban development in the most at-risk areas and introduce new controls in other parts of the city, were unveiled by the Dunedin City Council yesterday.

And, despite confirmation about 10,000 properties would be covered by the new rules, property developers, real estate industry figures and the Otago Chamber of Commerce largely welcomed the proposed changes yesterday.

There will be consequences for people and we'll have to work through them community by community, but I think the council is acting prudently.''

However, Real Estate Institute of New Zealand director Liz Nidd, of Dunedin, worried the ''broad brush'' approach could see properties not at risk being labelled hazardous.

''It has the potential to damage the value of properties if they take the brush too wide.''

The council's approach aimed to manage the risk from a host of potential threats, ranging from flooding and landslips to storm surges and sea-level rise.

Council policy planner Sally Dicey said yesterday new hazard maps and planning rules would be added to the council's second-generation district plan, which was being worked on. The council planned to consult the public on the proposals, beginning later this month.

Any changes would not be introduced until the second-generation district plan was operative next year.

If confirmed, the new rules would cover up to 8600 of the city's 46,600 residential homes and about 1500 commercial and industrial properties.

The extent of restrictions would vary depending on the perceived level of risk, and the most extreme rules would apply to only 282 existing residential properties.

Existing homes could also remain as-of-right in those areas, but new developments - or significant expansions - would be prohibited, which was ''quite a strong approach'', Ms Dicey said.

That could affect those who had planned to develop or sell vacant lots they owned inside the most at-risk areas.

Cr David Benson-Pope, chairman of the council's planning and regulatory committee, said it was ''probably inevitable'' some property prices could be affected.

The changes covered a ''significant'' portion of the city and ''may well affect the saleability of the property, or who might be interested in buying it in future'', he said.

However, the council also had a legislative requirement to manage the risks posed by natural hazards and it was not just ''someone's bright idea to do something new or different''.''

These are real issues for the whole country and I think it's timely that we are doing the plan and incorporating this material,'' Cr Benson-Pope said.''

If the council holds the information ... we've got a pretty clear responsibility to make sure we act on it.''

Ms Dicey said maps showing the new ''hazard overlay zones'' - identifying the threats in each part of the city - had been prepared by the city council from Otago Regional Council information.

The maps identified threats on a scale from extreme risk to low risk and applied different restrictions to each zone.

The changes could also affect insurance cover in the most at-risk areas.

Ms Dicey said much of the information was already accessible and was just being made ''far more available''.

Insurance Council of New Zealand spokesman Samson Samsoni said the discussion document would not by itself affect insurance or premiums.

''Individual insurers will determine their appetite to take on that risk and at what cost,'' Mr Samsoni said.

But the DCC and ORC should be ''applauded'' for their work on natural hazards, which would contribute to the ''ongoing affordability of insurance''.

IAG New Zealand corporate affairs head Craig Dowling said IAG looked at the risk of various natural hazards as part of assessing insurance cover and responded differently depending on the level of risk a property had.

''We would, in some cases, make no changes; for example, for a new home in a flood-prone area which has been built to code, and in others we might impose premium and excess terms.''

Otago developer Allan Dippie said much of what both councils were saying was entirely sensible, because new developments should be encouraged away from places such as estuaries and low-lying, flood-prone land.

Waikouaiti Coast Community Board chairman Gerard Collings said coastal communities such as Waikouaiti, Waitati, Blueskin Bay and Karitane were aware of the risks they faced, but the councils' work was ''a positive step forward''.

Ms Dicey said that as well as a ban on development in the most at-risk areas, there would be new consent requirements, minimum floor levels and other rules - including restrictions on earthworks, fences and building platforms - in other zones.

However, changes, including to the boundaries of some hazard zones, could be agreed during consultation with landowners. Cr Benson-Pope said the new approach was not yet ''cast in stone'' and he urged the public to have their say.

Public consultation would run from June 24 to August 1 and include 11 public meetings around the city.