By Andrew Marshall
6 Comments
It all started with a bottle of milk in a Berlin supermarket.

Port Chalmers resident Bill Southworth was visiting the German capital in 2018 and was amazed at how much cheaper the food was compared with New Zealand.

That set off a chain of events that led to the Commerce Commission releasing its long-awaited draft study into the retail grocery market yesterday morning.

The study found that the market was dominated by the Foodstuffs and Woolworths NZ duopoly which meant that customers were the ones losing out through lack of competition.

In 2017, New Zealand had the sixth most expensive grocery market out of 38 OECD countries.

The high prices were no surprise to Mr Southworth after his European trip.

"I grabbed the [German] supermarket flyer with all the products and prices in it and translated it back into New Zealand dollars ... In every instance our prices were higher." 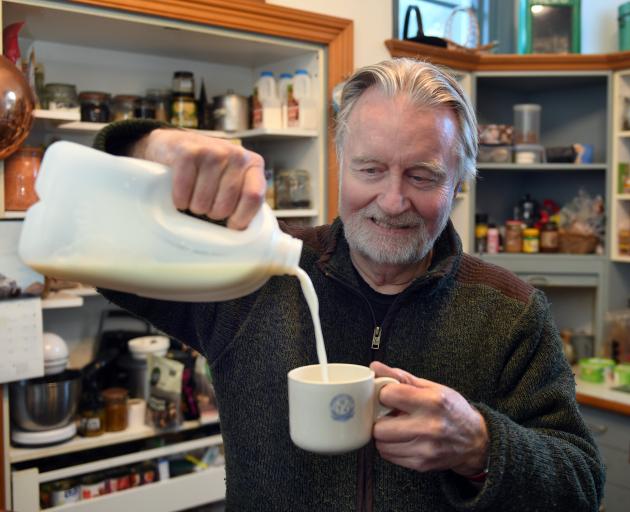 West Harbour Labour Party chairman Bill Southworth pours a cup of milk in his home after the Commerce Commission released its draft report into supermarkets. PHOTO: STEPHEN JAQUIERY
As chairman of the West Harbour branch of the Labour Party, Mr Southworth discussed the issue with his fellow members.

They put a remit for an investigation into the supermarket duopoly to the regional Labour conference, which then went to the national conference where it was passed unanimously.

This put the issue on the Government’s radar, and shortly after the election, local MP and Commerce and Consumer Affairs Minister David Clark announced the market study into supermarkets to determine "whether the sector is as competitive as it could be".

The preliminary findings indicate it is not.

Commission chairwoman Anna Rawlings said the big two retailers appeared to avoid competing strongly with each other, while potential new competitors faced challenges such as competitively priced wholesale supply and lack of sites for large-scale stores.

“Without intervention, we currently see little prospect of a new or expanding rival being able to constrain the major retailers effectively, and improve competition in the sector.”

The report also showed suppliers were hurt by the lack of competition.

Retailers would use fears of delisting products to push suppliers to accept disadvantageous terms.

The report suggested introducing a mandatory industry code of conduct, and allowing collective bargaining on behalf of suppliers, as potential ways to improve the situation.

Measures such as mandatory unit pricing, and simplified pricing and promotional practices, were recommended.

Woolworths New Zealand managing director Spencer Sonn said that on face value some of the recommendations would have "significant implications" for the business.

"We will now take the time to read it so we can provide our feedback within the required timeframe."

Mr Southworth said he was delighted at the contents of the draft report and said it showed democracy worked at a local level.

"We dropped a pebble in the pool, and it ended up in a tidal wave at the end of it."

The draft report is now open for public consultation and will be submissions accepted until August 26. — Additional reporting The New Zealand Herald

Land of plenty, Yeah right!!! More like land of the price gougers. And someone on TV said "We are lucky that we now get to buy export quality because the markets have slowed down." Only in NZ is where the best stuff goes overseas at a cheap price and we get the seconds but still have to pay more. Sick.

The NZ public & environment pays the cost of environmental degradation; poisoned waterways; endangered flora & fauna; paying farmers during weather crises; the very low wages paid to meat & horticultural workers, and to supermarket staff! The list goes on and on. Yet the public is forced to pay extortionately higher prices for NZ products sold cheaper transported '000s kms. Something is very rotten here.
There should be "national" products that have legislated price ceilings so that the NZ public (whose taxes help support production, & whose country takes an environmental beating for production of these products; and whose wages in the industries are very low) can eat "proudly clean, green NZ" products. Dairy, beef, mutton, fruits & vegetables should be affordable to all, not just those on higher than average wages.
WHY are supermarkets allowed to have persistently v high profits, forcing NZ producers into debt & breaking them?
Our market gardens have gone. Replaced by housing on our most fertile land because supermarkets would not fairly buy their produce locally. Instead, berries, vegetables, meat was sourced from the North Island or imported.
Something is Rotten.

This, unfortunately, was a waste of time. Nothing will become of the results should they actually report what they found. The findings will be discredited to the hilt. Swept under the rug as usual

More national party press releases from their leading Otago spokesperson.
Time will tell. I take it from your tone that you believe the govt should step in and regulate, increase compliance costs for the supermarkets, increase the number of public servants so the can send inspectors out to keep an eye on them, take the socialist line. Seems to be Nationals answer to everything.

Did they factor in cost of importing products?, cost of transport, cost of running the business? rent? maintenance? Insurance? there are other factors at play for higher grocery prices in New Zealand. Are those cost's in the EU are a lot lower allowing for lower grocery prices? Was there any indication of the margin for each unit sold? 5% - 10% profit?

There is a simple flaw in your argument. If you compare the prices charged for NZ products in foreign countries to what is charged for for the same products here in NZ you find that foreign countries charge less, especially in the UK and Europe. This can easily be checked online bu anyone who has an internet connection.
My kids, who currently live in the UK regularly tell me the bargains they get on NZ products, prices cheaper than we pay here. Also, Australian lamb sells cheaper in NZ than NZ Lamb and the aussie stuff is far better quality.