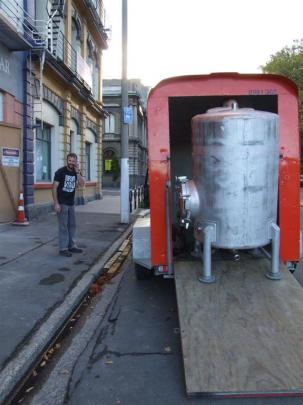 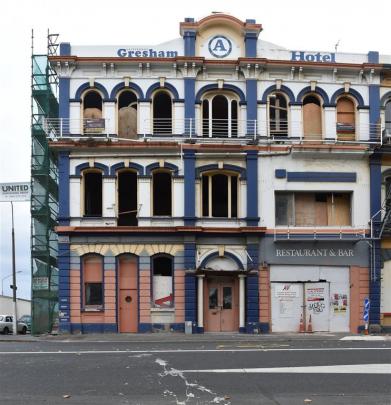 The ‘‘enthusiasm and vibe'' of the developers behind Dunedin's heritage precinct has helped attract a new industry to the area, albeit in pop-up form at the moment.

Cromwell winemaker Brendan Seal plans to bring three tonnes of grapes and to add to the equipment he has already stored there to start winemaking in the former Gresham Hotel site by the Queens Gardens.

While he will be on the site only for one month, making between 150 and 200 cases of wine, he hopes to start a permanent business in future, once he has tested the market.

Mr Seal, who moved to Cromwell to work after studying at the University of Otago, said he was keen to move back to a city he said had plenty going for it, and a heritage precinct full of enthusiasm.

‘‘What I'm committed to is being in that district.

‘‘I really want to be involved in what's happening in Dunedin at the moment. I think it's fantastic.

‘‘There's an enthusiasm and a vibe there I really want to be a part of.''

The idea was nothing new, he said, as historically in Europe people transported grapes to local town squares to produce wines.

Modern city wineries were common in the United States and had been established in Australia.

Dunedin had a nearby world-class wine producing region in Central Otago, with an established reputation.

He said the Gresham Hotel site, where he would occupy a section of the ground floor set aside by developer Stephen Macknight, was ‘‘perfect'' for his pop-up operation.

The building is being developed into apartments by Mr Macknight.

Mr Seal's plan was to bring the three tonnes of grapes from Central Otago in the next week or so, ferment the wine and put it in barrels, then store it in Dunedin or Cromwell.

His idea was to test the market, and eventually open a permanent business.

In Cromwell, he was a contract winemaker, making his own wine under the Writer's Block brand, as well as making wine for small top-end clients.

He had also made wine in the United States, Cyprus and the United Kingdom.

While the pop-up plan might continue for a while, ‘‘hopefully next year I'll be bigger, and be more suitable to make wine for other people as well as myself'' in Dunedin, he said.

‘‘Ultimately, I'll become permanent, but I just have to become pop-up for a while at least.''

Mr Seal said he planned to have an open day at the site while he was there.

Other possibilities associated with the winemaking business in future could be a cafe and restaurant, as was done overseas, as well as a ‘‘cellar door'' wine tasting outlet which could attract cruise ship passengers and other tourists, bringing Central Otago winemaking to Dunedin.