A community meeting in Middlemarch on Saturday discusses a proposed diatomite mine and a lack of information to date. PHOTO: LINDA ROBERTSON
Former Prime Minister Helen Clark has joined the growing opposition to a controversial mining project proposed for a geologically important site near Middlemarch. 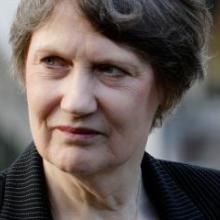 Helen Clark
Meanwhile, local opposition to the proposed multimillion-dollar diatomite is also growing with a meeting held on Saturday.

Australian company Plaman Resources, which has a majority Malaysian backer in Iris Corporation, wants to mine up to 500,000 tonnes of diatomite as an animal feed supplement - as opposed to its more common use as fertiliser - for export.

While the operation could generate more than 100 jobs, there are questions over mining, 24/7 truck fleet operations, roading issues and the value of the site being recognised as a vast fossil depository.

About a year ago mine owner Plaman Resources told the ODT it would be holding a public meeting in Middlemarch, but instead it is still awaiting the outcome of an application to the Overseas Investment Office to buy a farm next to the mine.

Plaman's proposed diatomite mine is in Moonlight Rd near Middlemarch, which was many years ago subdivided off the still existing Foulden Hill farm - the property Plaman wants to buy.

Miss Clark, a former Minister of Conservation, told Newsroom the trade-off between a "relatively low value mining operation" and the geological importance of the site "doesn't stack up".

"Do we value science and research, or do we just want to a quick dollar from a low value pit? I mean, really, it's distressing.”

Meanwhile, the meeting in Middlemarch at the weekend was called by local residents Patricia and Kobi Bosshard and attracted about 30 people to the local hall.

Andrea Bosshard and Shane Loader described themselves as "new residents" but with regional family ties.

The "catalyst" for the meeting was the leaking and subsequent publication three weeks ago by the ODT of a "private and confidential" report by investment bankers Goldman Sachs outlining how $470million was required to get the proposed mine to full production, Ms Bosshard said.

"There's some irony in finding out what's going on in our backyard through a randomly leaked Goldman Sachs report to the ODT," she said.

"Most people had forgotten about it, from a year ago, having heard nothing," she said.

"The [meeting's] purpose was not pro-mining or anti-mining, but to look beyond the conjecture, hearsay and rumours," Ms Bosshard.

However, she said while no vote was taken, the general consensus of the meeting was not for mining development, but instead the foundation of a "geo-park", as had happened after the discovery of similar diatomite fossil sites in Germany, Norway and China.

The Foulden Hill Maar (a volcanic crater lake) is rich in fossils and considered a pre-eminent site by geologists and academics.

"The natural heritage should be first and foremost of any development," Middlemarch resident Shane Loader said of sentiment at the meeting.

While Plaman was not invited to the meeting, he said the company had had "plenty of opportunity" to engage with the community, further claiming "promises had been made to certain people ... talking to people behind closed doors" in the area.

The pair said another meeting would be held next month, in which the group would look at becoming formally "organised".

• Plaman's diatomite project is still scheduled for an update at the forthcoming Minerals Forum 2019, later this month in Dunedin.

Values are not something you can force on the unwilling. Consider the values emblazoned on the New Zealand Coat of Arms: the bottom right hand quarter is a symbol of mining. The top right quarter is farming. The bottom left quarter is agriculture. The heart of the Coat of Arms of New Zealand is three ships, representing a spirit of adventure, commerce and new beginnings. What of the values of a strong family, enabled through well-paying careers. New Zealand was built on farming and mining. Myopic deference to a dark green desire to crush commerce to bring about a workers paradise is also a value that is not shared widely amongst modern New Zealanders, but a is pushed amongst a privileged few. Let's hear what the business can offer to conserve the area for future generations. Study the parliamentary coat of arms in the meantime.

Is that the one with a cloaked Rangatira, right, and Zealandia (as opposed to Brittania) left? They were a more optimistic crowd in the 19th Century, primary producers, and rip, sh*t and bust over mining. Times have changed.

Besides, a 'workers' paradise' by stopping industry is oxymoronic.

"The [meeting's] purpose was not pro-mining or anti-mining, but to look beyond the conjecture, hearsay and rumours," A great attitude to take, and something that our politicians could learn from. Well done

Mon, are you a Scottish gentleman?