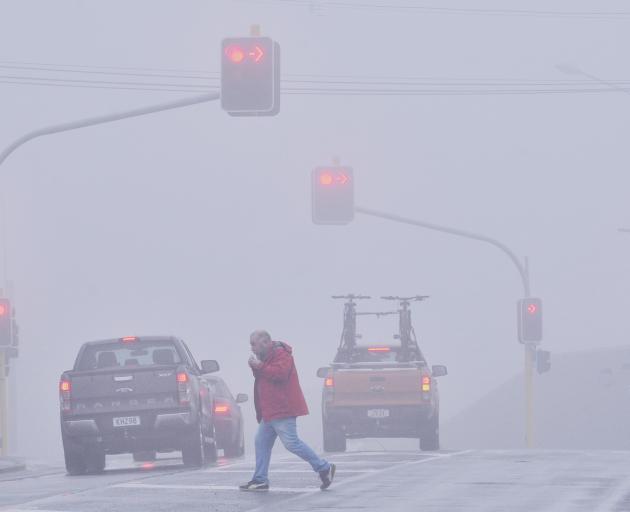 Drivers and pedestrians navigate their way through Dunedin's misty rain at the intersection of Taieri and Helensburgh Rds, in Wakari yesterday. PHOTO: GERARD O'BRIEN
Both the Dunedin City Council and the Otago Regional Council continue to keep an eye on rainfall and river flows today, despite MetService lifting a severe weather warning for the headwaters of Otago's lakes and rivers yesterday afternoon.

"The heaviest of the predicted rainfall has passed, but light to moderate rainfall is still expected to continue through to midday Saturday," she said.

She said the heaviest rain was expected to have fallen last night.

"Rivers and streams in Coastal Otago are continuing to rise after persistent rainfall overnight and today. However, as rainfall intensities are now predicted to slowly ease, these are unlikely to cause flooding."

Rivers and streams in South and West Otago were rising steadily yesterday afternoon, but flows were steady in Dunedin and on the Taieri.

Lakes Wakatipu and Wanaka also rose yesterday, and Kinloch Rd, near Glenorchy, was closed because of flooding.

However, she said the lakes were unlikely to reach flood warning levels because the rainfall was easing in the area.

"In the Queenstown Lakes District, Lakes Wakatipu and Wanaka are starting to reach their peaks and are still well below flood risk levels. Rainfall intensities are easing, but the lake levels will continue to be monitored," Ms Hunter said today.

He said the forecast was within "tolerable allowances", but the DCC had taken precautionary measures by doing pre-emptive maintenance work, such as clearing drains and putting contractors on standby.

MetService advised residents to keep up to date with the latest forecasts.