Communities empowered to be resilient could be less exposed to the ebbs and flows of the political tide, a former Cabinet minister and outgoing Christchurch mayor has told a Dunedin audience. 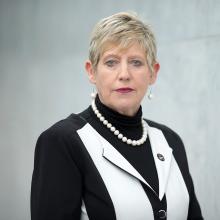 Lianne Dalziel.
In a promotional leaflet for the Labour Party event, Ms Dalziel said her aspiration for resilience was based on the belief that governments — central or local — could not do as well as properly resourced communities could do for themselves in determining their future.

She explored that thought further at the lecture yesterday.

Ms Dalziel noted governments could reverse reforms of previous administrations and said some hard-won rights could not be taken for granted.

The former minister for seniors reflected positive ageing strategies could be most effective if central and local government could work with senior citizens in a way that grew their capacity.

The annual Dame Dorothy Fraser Lecture affirms women in politics and leadership and it was started by former Dunedin South MP Clare Curran.

It could not be held last year because of Covid-19.

Ms Dalziel is retiring this year after three terms as Christchurch mayor.

She did not have another campaign left in her and it was time for her to find a different purpose, she said.

In an interview conducted by Ms Leary, Ms Dalziel talked about her involvement in the union movement, the collapse of finance companies and the emergence of social media.

She believed women — particularly prominent and strong women — were more likely than men to be targeted for abuse from trolls.

Ms Dalziel described the 2005 election campaign, when Helen Clark was prime minister and the Opposition was led by Don Brash, as "awful".

She called it misogynistic, divisive and selfish.

Ms Dalziel said she had learnt a lot about building resilience across communities after the Christchurch earthquakes.

She had also travelled to Japan to acknowledge victims of the CTV building collapse in Christchurch.