Complaints and praise for minister 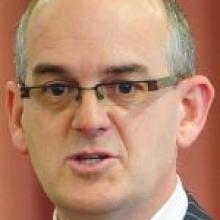 About 75 people turned out to hear him talk about the Ministry of Health's goals and achievements, question him about a range of topics, and offer policy suggestions.

Mr Ryall said health "was really the big winner" in last week's Budget, with an extra $585 million going to the sector this year.

"We have got some big challenges ... but we are focusing on key services of interest to the public and making sure our workforce is growing," he said.

Some members of the crowd congratulated him on further WellChild funding, decreasing waiting times for treatment of cancer patients, and for recognition of enrolled nurses.

Pat Perkins believed mental health needed to be one of the ministry's top priorities to assist those who needed long-term care.

"There is very little long-term care for these people and what their families go through is diabolical," she said.

Mr Ryall said the Government was putting an emphasis on primary mental health and there was an "increased focus on suicide prevention work and increased funding in mental health".

Dr Susie Lawless said more funding was needed in after-hours care as too many people could not afford the service so were clogging emergency departments - an expensive way to treat a problem.

Others had concerns about the future of Pharmac under TransPacific Partnership trade talks, and Mr Ryall reiterated Prime Minister John Key's support of the agency.

Mr Ryall referred many back to the Southern District Health Board or Southern Primary Health Organisation, but enjoyed receiving people's "unfiltered" concerns about the health system during the "great" meeting.