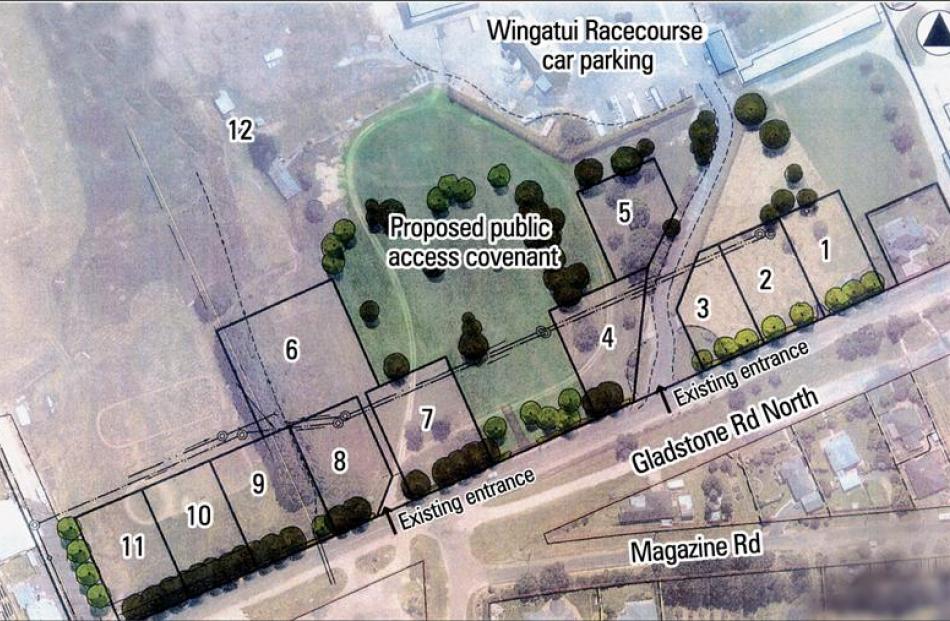 A revised plan for a possible subdivision on Wingatui Racecourse land, which attempts to reduce the visual impact of the subdivision and make it more park-like following concerns from nearby residents. Image supplied.

The Otago Racing Club has a battle on its hands over its plans to subdivide part of Wingatui racecourse.

Residents of the Dunedin suburb strongly oppose the club's proposal to subdivide the Gladstone Rd North edge of their property into 12 residential sections, saying it will ruin the rural feel of the area.

The club has previously said it wants to subdivide to raise capital for improvements to course facilities.

It believes the effects of the subdivision would be no more than minor.

Of 16 submissions made on its application to the Dunedin City Council earlier this year, 13, mostly from Wingatui residents, were in opposition.

The feedback prompted the club to call two subsequent meetings with submitters, which resulted in a revised layout for the subdivision being submitted to the council, although the Otago Daily Times understands strong community concern over the proposal remains.

The concerns about the application, which also seeks to rezone the land for the sections from rural to residential, were largely similar.

Wingatui residents worried about the loss of rural outlook and amenity, urban creep and wider planning implications, increased traffic and loss of parking when there were already issues in the area on race days, a precedent being set and a lack of consultation.

Several said they had bought their properties because that area was zoned rural.

''We bought our property for its rural outlook and we expected it would stay that way,'' David and Janice Hodges said in their submission.

Caroline Hunter and Tony Heptinstall said the ''rustic ambience and lifestyle choice'' offered by living in Wingatui and areas similar to it in Dunedin were disappearing and there seemed to be no overview of what was happening.

''People who live here ... don't want to live completely surrounded by houses - nor do we. That's not why we chose to live here.

''There must come a time when the [DCC] makes a decision a rural zone (and boundary) can have integrity, can be relied upon, can remain intact. There is a bigger picture to be considered here ...''

Another resident agreed the district plan rules were ''being bent and changed too often'', while many were concerned about the future.

''If one lot starts, what is to stop ongoing rezoning?'' Karen Robson asked.

Some were also annoyed the club publicly said it had consulted residents, but none recalled being made aware of the proposal before the council sent them copies of the application.

Members of the Wingatui Community Hall Society said they supported the club but the subdivision would have a major physical effect on the area.

While it said it wanted capital, the club's desire to sell off bits of its land was clearly to keep itself afloat and was simply ''delaying the inevitable'', their submission said.

It should combine with the Forbury Park Trotting Club, sooner rather than later, and the council should decline the application on the basis of protecting the district plan's integrity, the society's submission said.

The Otago Regional Council opposed the project until the club showed how it was going to secure the area against natural hazards of the area, including flooding and land instability.

The Fire Service was neutral and one person, a builder from Dunedin, supported the club's plans.

The application, which was initially expected to be heard in May, will be heard by a council hearings panel on August 29.