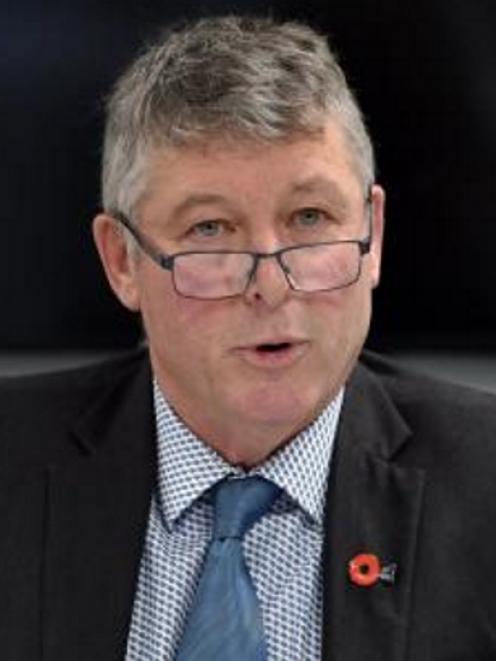 Andrew Noone. Photo: ODT files
Leaving a committee meeting after a conflict of interest issue was raised by the council chief executive was a mistake, the Otago Regional Council's chairman now says.

Further, Andrew Noone says he is ‘‘perplexed’’ as to why the issue was raised at all at the meeting last week.

Councillors were merely reviewing a regularly issued report from council staff, he said.

Mr Noone was the fourth councillor to leave the regulatory committee meeting when questions were asked about forestry in a quarterly activity report.

But he only left the meeting after he was specifically asked about his forestry interests by chief executive Sarah Gardner.

‘‘I found it a bit strange why that question was asked of me,’’ Mr Noone said this week.

‘‘But I’m comfortable that I’ve done nothing wrong.

‘‘And I’ve had a fairly detailed, or fine lens, over my own personal situation in terms of conflicts and the outcome is quite conclusive and clear.

‘‘I’m comfortable that I haven’t got any conflicts that I need to manage at a regulatory meeting when it’s noting a regulatory report.

‘‘I’m a little perplexed about all of it actually.’’

After Crs Gretchen Robertson, Carmen Hope and Bryan Scott left the meeting, Mrs Gardner addressed Mr Noone and said ‘‘I’m sorry, just checking, you don’t have any forestry interests yourself?’’.

Mr Noone briefly protested but then said he would leave the meeting.

‘‘Honestly, my advice to all of you is, you don’t want to put at risk anything that happens in the meeting, and so it’s not for me to determine your conflict of interest but I will continue to raise where I think there may be risk, that’s all,’’ she said.

It was part of her role as the council's principal adviser to raise procedural risk with councillors, she said.

Only a member could determine their own conflicts, and if there was a conflict, standing orders directed how to manage them, she said.

However, this was not the first time recently the issue of conflicts of interest has been raised at the council.

In February last year, the council went to the Office of the Auditor-general to apply for exemptions or declarations under the Local Authorities (Members’ Interests) Act 1968 to enable certain councillors to take part in specific decisions about freshwater management.

Crs Kate Wilson and Gary Kelliher were told not to vote on water permit plan change decisions at the time because they held water permits requiring renewal.

And in a written decision, the Office of the Auditor-general said Mr Noone could vote on the water plan changes.

But it also said the Auditor-general understood Mr Noone and other councillors with forestry interests would remove themselves from the forestry-related discussions around the council’s water quality plan change.

More recently, as councillors voted on provisional indications of the low flow conditions when water cannot be taken from the Manuherikia River, Crs Robertson, Scott, Alexa Forbes and Marian Hobbs wrote to Environment Minister David Parker alleging among other things conflicts of interest in that vote and in council workshops when developing Otago’s land and water plan.

So we are irrigating their forests as well as their farms? It all sounds very comfy cosy for those in charge at the ORC doesn't it?

Sounds rotten to me - that they are part of the decision-making processes for water when they have such vested financial interest in using the water and minimizing flows. "Local government" can so easily get bent to serve the purposes of those few who are elected and making decisions for all (and themselves), often behind closed doors.
And how are some of these members allowed to deny the validity of science, therefore successfully stopping or delaying environmental legislation which harms their personal business interests, or their lobbyists? We obviously don't have the checks and balances in our local democracy to prevent this "bending" of the principles of governance.