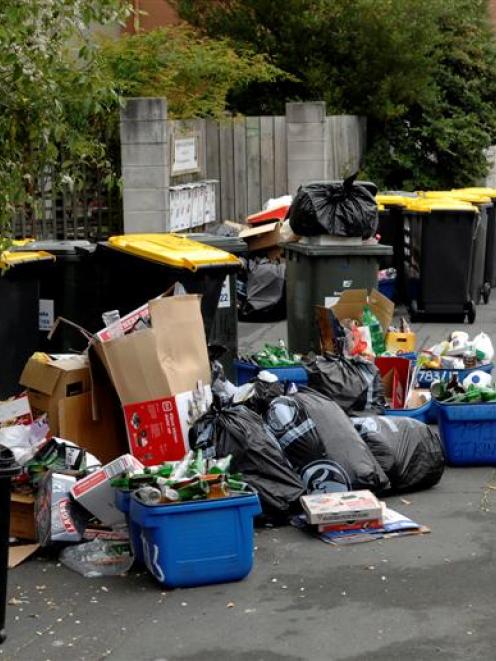 A fleet of 17 collection trucks rolled out for the first day of the new $26.7 million contract early yesterday, collecting rubbish bags and glass in blue bins from Pine Hill and West Harbour areas, and black bags and wheelie bins full of other recyclables elsewhere in North Dunedin.

However, contractors were left scratching their heads as some over-eager homeowners in Pine Hill and North Dunedin put out all three receptacles at once.

Others - also apparently confused - correctly opted for blue bins and bags only, but then mistakenly piled them high with an assortment of plastic and paper as well as glass.

EnviroWaste collection truck driver Peter French said almost all of the blue bins for glass had been contaminated by paper, plastic or other materials.

"I would say probably 95% of the bins I have done today have had contamination in them," he said.

Student areas of North Dunedin seemed largely tidy when the Otago Daily Times visited, with a few obvious exceptions as clusters of wheelie bins and rubbish piled up outside multi-unit accommodation blocks.

Someone had even optimistically placed the burnt-out remnants of a couch on the footpath next to their wheelie bin.

Despite the teething problems, Dunedin City Council solid waste manager, Ian Featherston, said he was largely pleased at the results of yesterday's collection.

About 9500 wheelie bins and blue bins had been collected, with the operation going "pretty well" despite contamination problems, he said.

Staff from the council, contractor EnviroWaste and Campus Watch would visit problem areas today to conduct a mail drop and talk to people in "hot spots" and try to correct their behaviour, he said.

However, it was up to residents to ensure they understood the information already sent out, he said.

Under the new system each household was provided with a 240-litre wheelie bin - or a smaller 80-litre substitute - for use with plastic, cardboard, paper and other non-glass recyclables.

Rubbish would still be collected weekly, while recycling would be collected on alternative weeks, and instructions had been sent to each home along with new wheelie bins.

Mr Featherston said the rest of the city would be covered as usual in stages over the course of the week, with Mornington, Belleknowes, Roslyn, Wakari, Halfway Bush, Brockville and part of City Rise next, today.