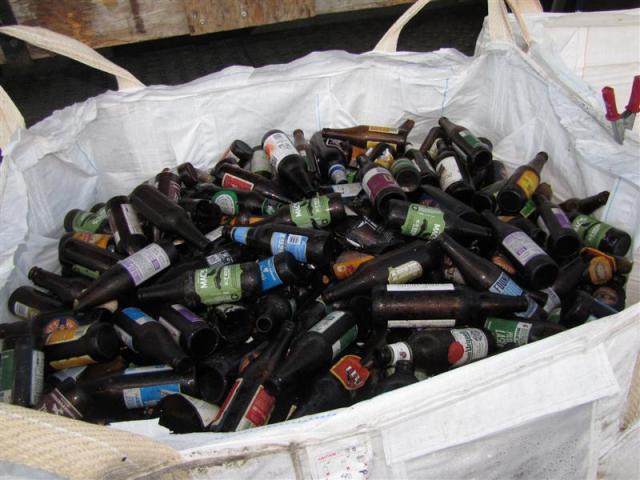 All of Queenstown's glass ‘‘recycling'' is being sent to the town's Victoria Flats landfill.  The Queenstown Lake District Council confirmed glass had not been recycled by contractor Fulton...

''I really believe something good can come out of the ashes ...'' Ruth McNamara said.

A Dunedin woman who produces just half a chip packet-full of household waste a month is set to become the Dunedin City Council's poster girl for waste minimisation.

As a stockpile of the city's plastic waste grows ever bigger, the Dunedin City Council is being warned it may have to increase rates if returns from recycling do not improve.

A plastic mountain is growing in Dunedin after a recycling crackdown in China.

A Dunedin apartment-dweller's calls for more recycling services in inner-city areas could soon be answered by the Dunedin City Council.
A Wanaka Wastebusters complaint about recycling claims made by New Zealand drinks manufacturer Charlie's has been upheld by the Commerce Commission.
Mara Lopez pleads for much more recycling in ''beautiful'' Queenstown.

Keen recyclers from Wakatipu schools witnessed what happens to the bottles and newspapers they recycle during a five-year anniversary tour of the Wakatipu Recycling Centre on Thursday.
The new Love NZ recycling initiative, "It's a Karma Thing", has been launched by Dunedin Mayor Dave Cull.

A free national recycling scheme is to be rolled out to help prevent television sets being dumped in landfills.

A waste management initiative at Coronet Peak, prompted by staff feedback, has seen a significant increase in recycling at the ski area.

Changes to Queenstown's glass-recycling systems are being considered to eliminate contamination and prevent a 4100 tonne backlog of unprocessed glass from getting any bigger.
Two businesses have joined forces with the Queenstown Lakes District Council to support the "Paper4trees" initiative in the region, which educates children about recycling and gives them a chance to exchange their recycling for native trees.
Entries for the Black Gold Kai Club Matariki Recyclable Arts Competition close on Friday.

Recycle Wanaka Wastebusters has sent more than 1200 Charlie's Honest Water Eco-Bottles to the drinks manufacturer because it cannot recycle the plastic material they are made from.

Dunedin's recycling culture has come a long way in a short time, helped by the city's multimillion-dollar Green Island recycling plant, Mayor Dave Cull says.
The six-month trial of the electronic waste depot at Frankton Refuse Station has been extended by another six month, coinciding with a push for greater public awareness of the service.
A national recycling initiative launched in Dunedin ahead of last year's Rugby World Cup has proved a hit, and could even be expanded.

About 5500 households in Wanaka and surrounds will receive a new recycling crate this week as recycling contractor Smart Environmental Limited prepares to launch its service in the area from March 5.