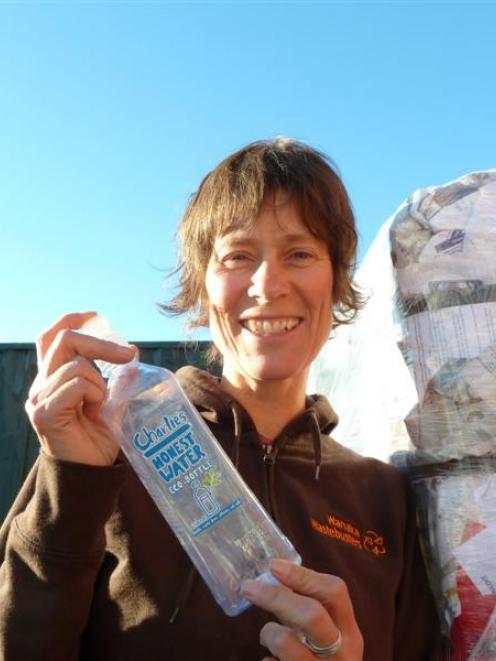 Gina Dempster with a Charlie's bottle, which cannot be recycled in Wanaka. Photo by Sophie Ward.
Recycle Wanaka Wastebusters has sent more than 1200 Charlie's Honest Water Eco-Bottles to the drinks manufacturer because it cannot recycle the plastic material they are made from.

However Charlie's, which has arranged for the 50kg of plant-based PLA bottles to be industrially composted after the issue was publicised by television media this week, says recyclers like Wanaka Wastebusters do have options for processing the bottles.

New Zealand's recycling industry handles easily recycled oil-based PET plastics and, while Wanaka Wastebusters has nothing against PLA, there are no facilities for recycling it in New Zealand.

The labelling on the Charlie's water bottle includes a recycling symbol and the words "please recycle", a "confusing" message for consumers and retailers, Wanaka Wastebusters spokeswoman Gina Dempster said.

Wanaka Wastebusters usually removes the Charlie's water bottles from its recycling stream and throws them in the rubbish, but after a huge number arrived after the Warbirds show at Easter it was decided to send them to Charlie's in Auckland for recycling.

In a media statement, Charlie's chief executive Stefan Lepionka said there were several options for recyclers dealing with class 7 plastics such as PLA, including exporting it to recycling facilities in Belgium, the United States and China.

"In our case, the separated PLA bottles could be sent offshore like PET; they could be industrially composted in New Zealand; or, if they chose, up to 1% of PLA could be added to the PET recycling stream without contamination issues." Charlie's water bottles constitute less than 0.25% of the total recovered PET in New Zealand, but Wanaka Wastebusters' "whole mission" was to keep all contamination out of its recycling streams, Ms Dempster said.

Mr Lepionka said, because PLA had been introduced relatively recently in New Zealand, and there were low volumes of PLA versus PET, the majority of recycling organisations which had signed up with councils to collect class 7 plastics had not equipped their systems to deal with PLA.

"As the volume of PLA grows in New Zealand, separating PLA from other plastic bottles will become more commercially viable for the recyclers," he said.

Charlie's had not received any other negative feedback on PLA bottles since the product came on the market in 2009.