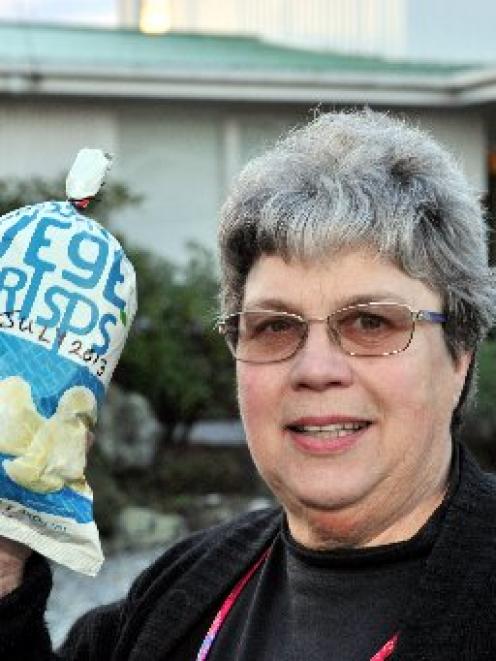 Ann Dennison with her household waste from July - a little more than her usual monthly rubbish. Photo by Linda Robertson.
A Dunedin woman who produces just half a chip packet-full of household waste a month is set to become the Dunedin City Council's poster girl for waste minimisation.

Ann Dennison was yesterday described by city councillors working on a review of the city's plan for managing and minimising its waste, as the ''model resident''.

The 63-year-old told councillors she decided about a year ago, as a grandmother and with the world's population reaching seven billion, that the idea of filling the land with waste was ''really screwy'' and it was time to do something about it.

Already an enthusiastic recycler, she was at first unsure how to reduce her waste further.

''I started my journey and I found I was deemed nuts. But I knew that anyway, and so I googled it and found there were a whole world of people who were equally nuts, and that's where I found the solutions.''

She has since achieved a near zero-waste lifestyle.

''You learn really quickly ... It's not hard, it's just a matter of bothering.''

She started by examining what her main rubbish was and found it was plastic bread bags.

So she devised a carry bag for bread made from T-shirt material and buys fresh bread.

Mrs Dennison, a semi-vegetarian, takes a jar with her when she gets fish from the supermarket and buys only tin or glass containers.

She tries to buy cotton clothing, which can be composted.

Her waste is reused, given to playcentres or op-shops, repaired or composted.

Failing that, it is recycled.

Putting waste in the landfill was her last resort.

One of six people to make verbal submissions on the proposed waste management and minimisation plan, Mrs Dennison called for bans on plastic supermarket bags, plastic parking tickets and the dumping of compostables at the landfill, among other suggestions.

After hearing her story, committee chairman Cr Andrew Noone told her she was a ''model resident'' in terms of waste management, and asked if she would be interested in doing promotional work with the council.

Mrs Dennison said she would be happy to work with council waste strategy officer Cath Irvine on a case study for householders.

Earlier, Oamaru man Peter Brown asked the council to investigate neighbourhood or larger composting systems, while former consulting engineer David Tucker advocated for a large-scale bioreactor at the Green Island landfill to produce gas for energy, although solid waste manager Ian Featherston pointed out the city was already converting gas produced at the landfill to electricity.

Andrew Bowen, from the Northeast Valley Evergreen Collective, stressed his group's interest in any council support for community waste reduction or re-use initiatives.

Mr Featherston noted the plan was a high-level document that would guide development of a detailed action plan, that would include many of the ideas raised.

Budgets for the various actions would be considered as part of the next annual plan process.

After deliberating, the subcommittee of Crs Jinty MacTavish, Fliss Butcher and Noone asked staff to gauge, perhaps via a survey on the DCC people's panel, community feeling on banning supermarket bags in Dunedin.

Staff were also asked to look at drafting a map of city locations for recycling or waste re-use and investigate further the street-side collection of organic waste, neighbourhood composting systems, a waste levy fund for community waste reduction initiatives and a competition for waste minimisation ideas, similar to the heritage re-use awards.

The subcommittee agreed to encourage the council to review setting a date for achieving zero-waste status once more data on waste flow had been gathered following the adoption of the plan.

The finalised plan will be presented to the infrastructure services committee for approval.