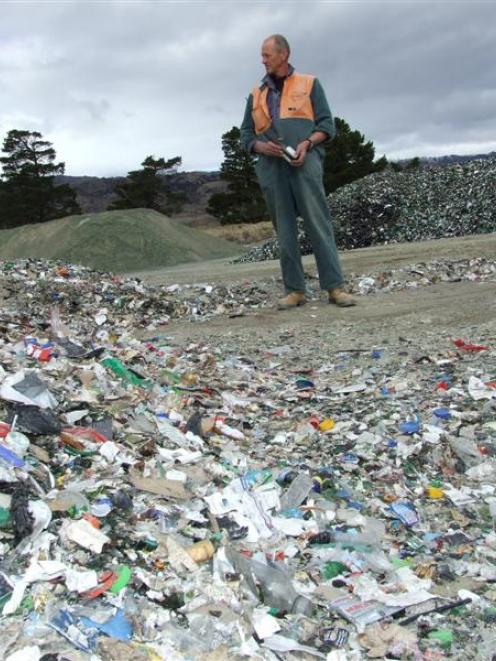 Fulton Hogan Parkburn Quarry supervisor Dave Rogers inspects the stockpile of contaminated glass collected as part of the Queenstown Lakes District Council's Wakatipu recycling service. Photo by Lynda van Kempen.
Changes to Queenstown's glass-recycling systems are being considered to eliminate contamination and prevent a 4100 tonne backlog of unprocessed glass from getting any bigger.

Queenstown Lakes District Council solid waste manager Stefan Borowy said 4118 tonnes of glass was stockpiled at the Fulton Hogan site at the Parkburn Quarry, near Cromwell, waiting to be crushed for use as road base.

Glass-crushing budget shortfalls and a drop in the council's waste services revenue had resulted in the glass pile growing during the past few years.

Fulton Hogan has held the contract to transport and crush glass from the Wanaka and Wakatipu recycling collection services since 2007. It raised concerns in 2009 about the high contamination level of the Wakatipu glass with bottle tops, cardboard and paper, Mr Borowy said.

Processing costs were subsequently increased from $35 per tonne to $47 per tonne, because Wakatipu's glass material had to be run through the crushing machine twice.

The lower level of contamination from Wanaka was because Wanaka Wastebusters - which held the town's recycling collection contract up until March this year - had separated glass from the other recyclables at the kerbside, Mr Borowy said.

When Auckland recycling company Smart Environmental Ltd (SEL) took over Wanaka's recycling collection in March, each household received a second crate for glass, which was now also colour-separated at the kerb and sent to Auckland, rather than to the quarry for crushing.

A small remaining amount of Wanaka Wastebusters' non-contaminated glass makes up part of the stockpile at the quarry. A much larger Wakatipu pile "might look highly contaminated", but was less than 5% contaminated by weight, which was within levels set by the council, Mr Borowy said.

"It looks worse than it actually is."

The contaminants in the Wakatipu stockpile would "unfortunately" go to landfill, following a screening process.

Mr Borowy was not concerned about the contamination levels yet, "but we're always looking to other ways of minimising contamination".

Next month, the QLDC Infrastructure Services Committee would consider various options for introducing glass colour sorting to Queenstown, such as an "add-on" facility at the Wakatipu Recycling Centre or changes to the collection service which could involve adding a second crate for kerbside sorting.

Central Otago WasteBusters had about 1000 tonnes of glass at its Alexandra site which could not be recycled because of contamination, manager Brian Fitzgerald said.

It had almost four times that amount a year ago, much of which was sent to Parkburn Quarry for crushing. The remaining 1000 tonnes was likely to be crushed and used to fill holes on site because of prohibitive transportation costs, Mr Fitzgerald said.

Dunedin City Council solid waste manager Ian Featherston said like Wanaka, Dunedin had a "no glass wastage" system. Contractor EnviroWaste colour-sorted glass at the kerbside before it was transported to Auckland.