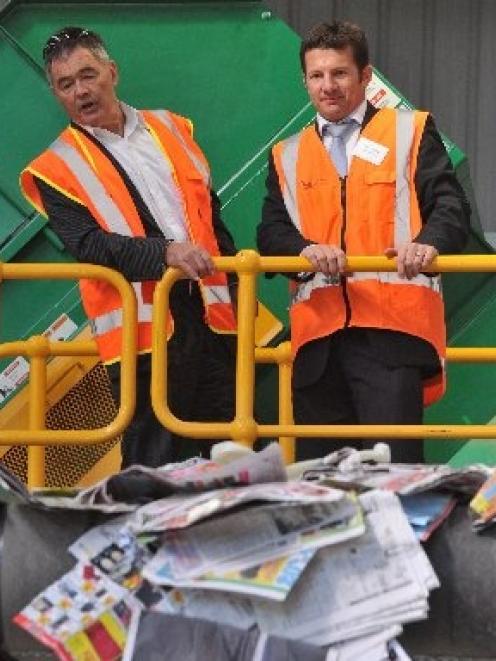 His comments came as Mr Cull formally opened the plant yesterday, nine months and thousands of tonnes of mixed recycling after the Materials Recovery Facility was first commissioned in June last year.

Mr Cull told a crowd of about 50 people at the plant yesterday it was useful to recall the days - not too long ago - when waste management was "all about simply disposal".

"We just biffed everything in a hole and recycling didn't exist.

"Recycling was going to the tip with your Dad and bringing home old bike frames and wheels to make carts," he said.

That changed in 2003 with the introduction of the city's blue bins, a "labour-intensive" system which handled about 5200 tonnes a year of all recyclables, but with all material mixed together, he said.

It changed again with the introduction of the city's new $26 million kerbside recycling system in February last year, and the commissioning of the new MRF plant - following a construction delay - in June.

The result was a "state-of-the-art" facility and the city's new wheelie bins for mixed recycling, and glass recycling that was separated to maximise profits when sold on.

"This is a giant step forward for our community and I would like to congratulate everyone involved," he said, before unveiling a small plaque to mark the formal opening.

Yesterday's ceremony came after mixed results since the plant's opening in June last year, with recycling rates up but concerns about the level of contamination of the recycling stream being dealt with at the plant.

In January, the Otago Daily Times reported a steady stream of discarded syringes and needles among the recycling was causing concern.

One worker pricked by a syringe required blood tests before being cleared of any infection.

There were also concerns about used nappies, dead animals and plastic bags, and contamination levels were said to be running at 12%, rather than the 5% found in other centres.

However, council solid waste manager Ian Featherston said yesterday contamination rates were dropping, and were sitting at about 5% if all recycling - including glass separated earlier in the process - was included.

The new kerbside collection system had handled 5570 tonnes of mixed recycling, and another 3000 tonnes of glass, in the year to March.

Of that, 3970 tonnes of mixed recycling had passed through the recycling plant since its opening in June, before being sold on, Mr Featherston said.

However, Fullcircle territory manager Taane Royce - responsible for the Green Island plant's operation - said the contamination message appeared to be getting through.

Levels were "a little better" since January and no dead animals had arrived in the mix recently.

However, syringes, used catheter bags and plastic bags were still arriving, which was a concern, he said.

The recycling plant was part of a partnership between the council and several companies.

The plant was built on Hall Bros land by another of owner Doug Hall's companies, Antzide Properties.

It was equipped by Carter Holt Harvey and operated by the company's subsidiary, Fullcircle Recycling, which shared office space on site with EnviroWaste, which provided collection services for the council.