Connecting to fibre not possible on red tag pole 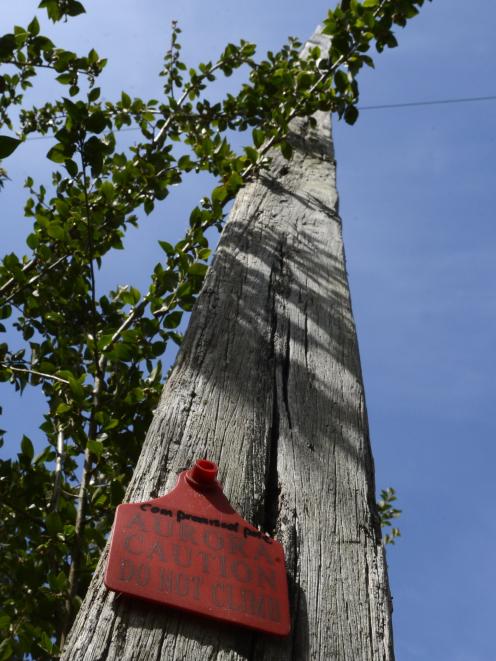 A red-tagged pole in Maori Hill that has ended attempts by a resident to hook up to fibre broadband. Photo: Gerard O'Brien.
The roll-out of ultra-fast broadband in Dunedin appears to be the latest casualty of the city’s compromised electricity infrastructure.

A Maori Hill resident says his attempt to connect to fibre broadband was stymied by an ageing power pole.

After three visits by technicians to find a way to connect him, the red-tagged pole, which was unsafe to climb or attach cables to, proved a bridge too far.

For now, Ian Pillans will have to make do with an internet connection he says is becoming increasingly slow.

A spokesman for Chorus, the national company rolling out fibre broadband across the city,  said nearly 80% of Dunedin’s ultra-fast broadband (UFB) fibre was aerial and as such, poles in good condition were "a prerequisite".

Delta marketing and communications manager Gary Johnson said the company was working closely with Chorus to help the roll-out in Dunedin and "Chorus advise us if they want to access our power poles to attach fibre".

Mr Pillans said he had been through a process with provider Spark, where technicians visited to assess how the home would be connected to fibre.

There was fibre already in Claremont St where he lived, so the connection just had to link to Mr Pillan’s property down a 20m driveway.

Three technicians arrived and made an assessment before Christmas.  Three visits were  eventually made.

On the third visit Mr Pillans was told "they couldn’t do anything" because the fibre cable would have to be connected via a red-tagged pole.

The technicians had been told by Delta, through Spark, they were not allowed to do anything.

"Delta had put a moratorium on any broadband connection, or dealing with those red-tagged poles at all."

There are two poles on Mr Pillans’ property.

One appears to have been disconnected from cables and left in place, and is so loose in the ground it can be easily pushed from side to side.

Another, which has a red tag, is on a lean and is partly held up by rocks at its base.

A Delta spokeswoman said despite the pole being on Mr Pillans’ land, due to its installation date, Aurora had taken on the maintenance responsibility.

Delta would follow up with Chorus on the situation Mr Pillans found himself in.

It was unclear how widespread the problem of installing fibre via the compromised poles was.

The Chorus spokesman said the company did not have detailed reporting available on the number of installations delayed as a result of poles being unfit.

"Where issues do occur we deal with them on a case-by-case basis."

Where an issue was identified with a specific pole, Chorus worked with Aurora through an established process. The first step was to clarify ownership of the pole before determining what plans were in place for fixing or replacing it.

Generally poles were owned by Aurora or Chorus but some were privately owned.

"In cases where we’re unable to get a timely refurbishment or replacement, we work with the customer requesting UFB on possible alternatives. Alternatives could include putting the fibre underground, or putting up a new pole.

Same problem in my street in Waverley.