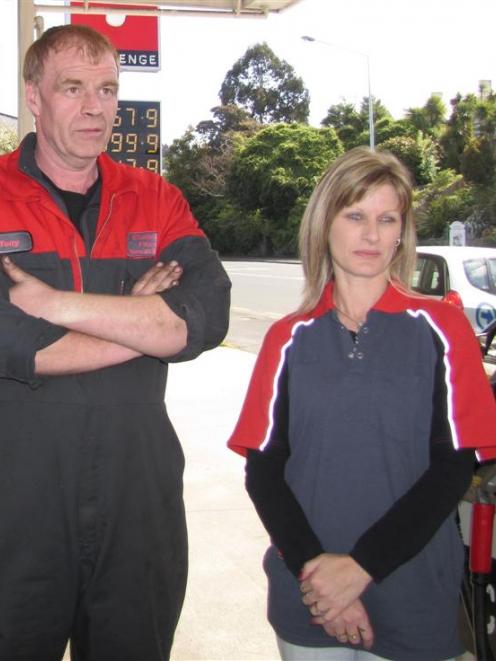 Challenge Fitzroy Service Station owners Tony and Sheryl Mathieson were upset to find their business still featuring on the Otago Regional Council's list of contaminated sites, a decade after the site was cleaned. Photo by Henrietta Kjaer.
Angry business owners have won a concession from the Otago Regional Council, which yesterday admitted its list of contaminated sites, made public earlier this week, was up to 10 years out of date.

The owners of the Challenge Fitzroy Service Station and McFarlanes Tyre Service both contacted the Otago Daily Times following publication of the list on Wednesday, angry their businesses' names had been dragged into the debate.

The regional council's list was provided to the city council, which released a copy on Tuesday.

Most recently updated in 2007, it named 30 sites across Dunedin as "confirmed contaminated" locations - including the Fitzroy and McFarlanes businesses - and detailed steps being taken to manage the problems.

However, Fitzroy owner Tony Mathieson said the information about his business appeared to pre-date extensive work carried out in 2000 to clear the site of contamination.

That included excavating contaminated soil and replacing leaking underground storage tanks with modern double-skinned tanks, and other equipment designed to prevent contamination, when the site switched from being a BP to a Challenge station in 2000, he said.

He bought the business in 2005, having been assured it was a clean site with modern facilities, and insisted other oil storage facilities, staff training and site plans were all in place to prevent contamination.

Site testing every six months since then had confirmed the site was not contaminated, and "part of our fuel contract is if we are contaminating the environment we are not allowed to operate", he said.

Despite that, customers had been phoning and visiting the station since Wednesday, asking questions and threatening never to return, he said.

He acknowledged historic contamination of the his site, identified in 1999, but insisted more recent annual tests after similar work showed the site was now clean.

Both men said regional council inspectors had never visited the sites, and questioned whether the council was doing enough to update its files.

"They [ORC] are the ones supplying the information to the public, but it's 10 years old. A lot changes in 10 years," Mr Mathieson said.

"Someone needs to be answerable somewhere along the line."

A check of the council's files yesterday had unearthed reports dating back to 2000 which showed the Fitzroy site should have been listed as "remediated", meaning any contamination was within acceptable limits, he said.

Instead, the site had been listed as "managed", meaning contamination remained, and the listing had not been updated since, he said.

It was normally up to property or business owners to provide information to the council, proving contamination had been cleaned, as staff did not regularly carry out inspections to update their records, he said.

"All these things happen through a chain of paperwork," he said.

Dr Selvarajah could not say why the error occurred, but staff would be checking the records of every other site on the list - including the McFarlanes business - and correcting any other mistakes found.

The updated list would also be provided to the city council.

Dunedin City Council development services manager Kevin Thompson said when contacted there was a "clear route for the information here", and it was up to the regional council to ensure the list provided to the city council was accurate.