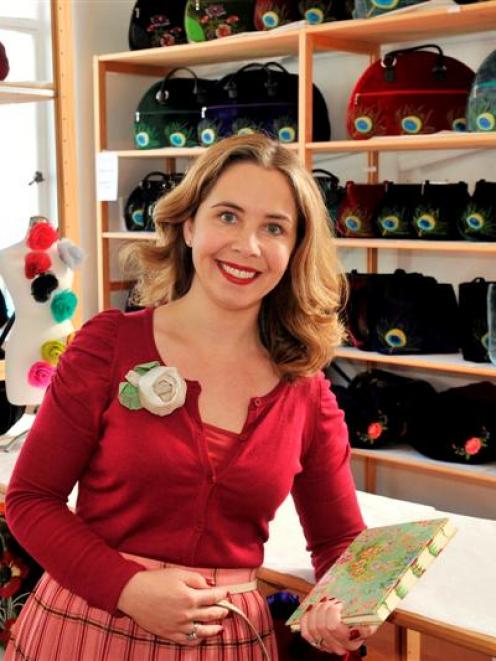 Dunedin designer Tamsin Cooper is co-hosting new television series Hearts in Crafts, which starts on TVNZ 7 on Saturday. Photo by Linda Robertson.
A pounamu carver who has US President Barack Obama and Catherine, Duchess of Cambridge, on his client list and a lace knitter who was commissioned to make a piece for Prince William's birth are among the master crafters who will feature on new television series Hearts in Crafts.

Dunedin designer Tamsin Cooper will co-host the 13-part series with DIY guru Justin Newcombe, of Auckland. It premieres on TVNZ 7 on Saturday.

In November, Ms Cooper received a call from the producer, who pitched the show as being "all about hand-crafted, hand-made products", and assumed she would be asked to feature in the show. When she was asked to host, Ms Cooper was "blown away" and "really excited".

Filming for the 13 episodes started in January and she had to draw on her previous life as a theatre studies student, and a brief stint of work experience at TVNZ when she was 12.

"It was a pretty steep learning curve [but] I loved every minute of it. It's a fascinating show," she said.

The series, a first for New Zealand, includes interviews with craft devotees from all over the country, visits to craft markets and groups, and projects tackled in the studio viewers can make at home.

"It's craft in its broadest definition. It will appeal to a broad demographic."

Ms Cooper learned potting, stencilling and book-binding for the show.

She also met , inventor Blair Somerville, of the Catlins, a Reefton woman who has 2800 porcelain dolls stored in three garages, and a Raglan man who makes footwear from old car tyres.

"My goodness, we have some talented people in our country. It's about profiling people we might not know about otherwise," she said.

She hoped the show would become a regular series because there were "so many more people out there who could be interviewed".

"The show is reflecting a global resurgence of craft."