Could it happen to Dunedin stadium? 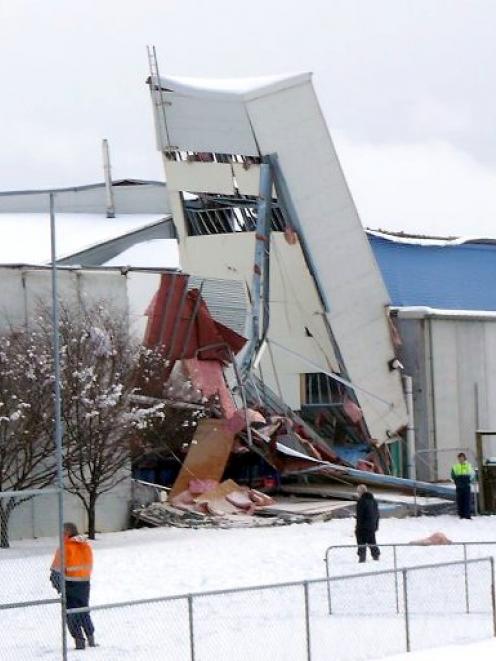 Invercargill's Stadium Southland lies in ruins after the roof collapsed under the weight of snow on Saturday. Photo by weatherwatch.co.nz
Dunedin's Forsyth Barr Stadium is being built to withstand a one-in-500-year snowfall, says Dunedin Venues operations director Darren Burden.

Mr Burden said the stadium would be strong enough to take up to one and a-half metres of snow.

"In reality, you would never get one and a-half metres because [the roof] slopes."

The sloping roof, aided by the non-stick roofing material, ethylene tetrafluoroethylene, meant snow would slide off once it started building.

In Invercargill, the finger-pointing has begun over the collapse of the decade-old Stadium Southland on Saturday.

Concerns about the flat roof were aired during the planning stage, but assurances were given the design was solid, he said.

In a worst-case scenario, the Invercargill City Council could be liable, if it was found the building should not have been approved. Southland Indoor Leisure Centre Charitable Trust deputy chairman Alan Dennis, also Invercargill Licensing Trust chairman, said it was not surprising some in the community looked for others to blame.

As far as he was concerned, the stadium had been built to high standards.

Mr Dennis said his first thought was "Yeah, right" when rung by stadium general manager Nigel Skelt shortly before midday with the news of the collapse.

The building looked as though it had been hit by a cyclone or bomb, he said.

Its demise would affect the local economy, as it had been fully booked for the next two years.

Sloping roofs did not of themselves prevent snow-induced collapses, he said.