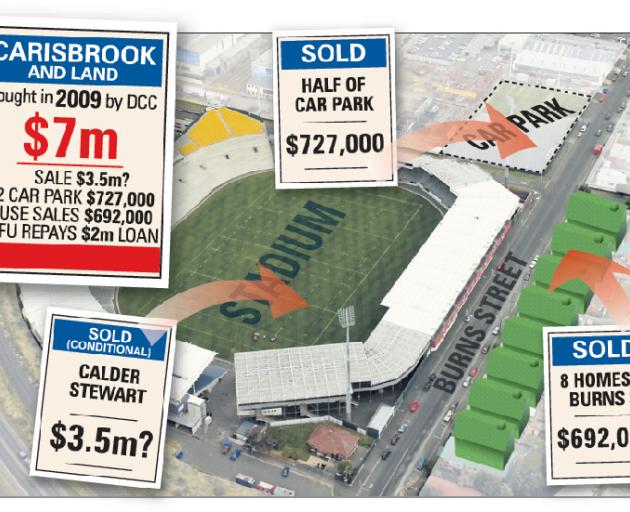 The Dunedin City Council will make a loss once Carisbrook is sold, and has been hit with another bill for holding costs from the old stadium approaching $1 million, it has been revealed.

Sources yesterday confirmed the council had signed a conditional agreement to sell the old sports stadium to building company Calder Stewart, in a complex deal said to be worth about $3.5 million.

Calder Stewart staff were not commenting yesterday, referring all media questions to the council, and Dunedin Mayor Dave Cull again refused to confirm specific details of the stadium deal.

However, pressed on whether the council would cover its costs once all Carisbrook properties owned by the council were sold, he relented.

''Yes, it looks likely council will make a loss,'' he said.

He would not say by how much, insisting that risked divulging details of the conditional sale agreement signed by the council.

It was confirmed on Tuesday the council had a conditional deal to sell the stadium to an unnamed buyer for an undisclosed sum.

Mr Cull has since refused to comment on the details, saying more information would be made public only after the deal was unconditional in ''weeks or months''.

In the meantime, the council was looking after ratepayers' interests by not jeopardising the sale, he said yesterday.

However, the Otago Daily Times understands the council could be left about $100,000 short once all properties were sold.

It had also recouped a $2 million loan to the Otago Rugby Football Union, meaning about $3.6 million was outstanding before the conditional deal with Calder Stewart.

The council was also in negotiations to sell the remaining half of the car park, but Mr Cull did not hold out hope that sale would bridge the gap and cover purchase costs of $7 million.

''Even with the best case scenario, it seems likely the council will make a loss on the overall deal,'' he said.

When asked yesterday, council acting chief executive Tony Avery also refused to ''confirm or deny'' Calder Stewart was the buyer, or the $3.5 million figure, that despite national media reports of the identity of the buyer, and suggestions the council stood to lose ''millions'' in the deal - a claim Mr Avery described as ''unfortunate''.

However, he confirmed the council had accrued $860,000 in holding costs in the four years since buying Carisbrook in 2009.

That was well above the $200,000 bill made public by council city property manager Robert Clark last November. Mr Clark was not commenting yesterday, but Mr Avery could not explain the discrepancy other than to suggest a possible miscommunication.

''I'm not clear what question he was responding to.''

Other costs had been met by the ORFU following the council's purchase of the stadium, until the union quit the site in 2011.

Mr Avery said holding costs of about $200,000 to $250,000 a year had been expected, and were covered by city property operational budgets.

There was no plan to recoup the bill, which reflected the extended time the council had ended up owning the stadium, he said.

''[The] council's been up front about wanting to pursue the sale of Carisbrook, and obviously reducing its holding costs was a factor.''

Despite repeated requests, nobody would say yesterday what was planned for Carisbrook, other than an industrial development in line with its industrial zoning.

Mr Avery said the buyer would have ''some plan, presumably'', but he could not say whether they planned to demolish everything on the site, or keep parts of it.