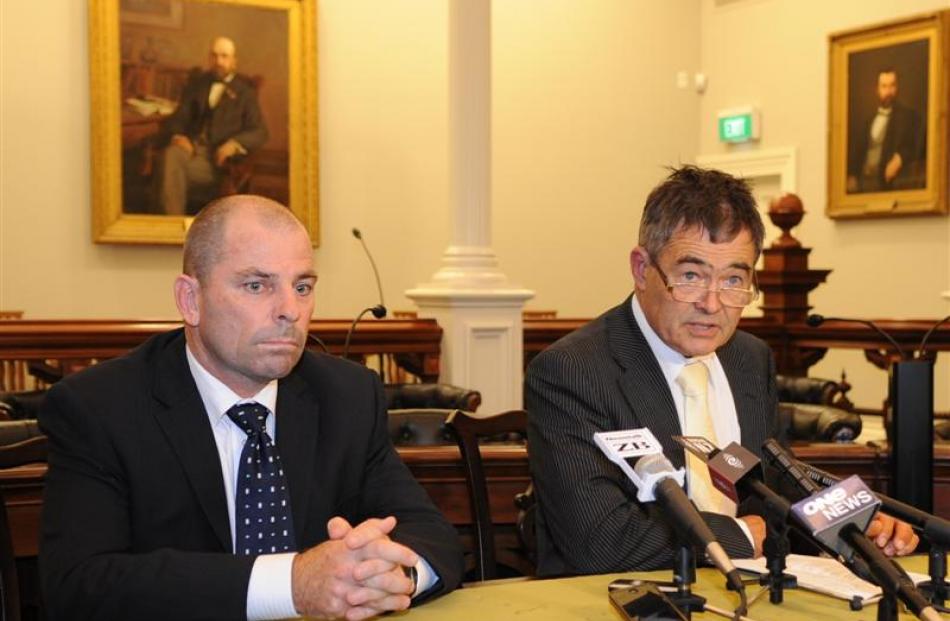 The Otago Rugby Football Union has been saved, with the Dunedin City Council agreeing to write off a debt of more $400,000 and the national union loaning it $500,000.

But the Otago board will have to resign and chairman Wayne Graham said last night he would be moving on.

After a marathon seven-hour plus Dunedin City Council meeting yesterday, the council agreed to write off its $400,000 debt. An $80,000 debt to Dunedin Venues Management Ltd was also written off.

Coupled with an agreement reached with the Bank of New Zealand over a $1.2 millon loan, the ORFU now believes it has a recovery package which will put the union on a sustainable long-term footing. It will also field a side in the ITM Cup this season.

Dunedin Mayor Dave Cull says the best has been made of a bad situation after Dunedin city councillors voted to help save the Otago Rugby Football Union.

Councillors voted 8-5 in favour of the rescue package following a torturous seven-hour non-public council meeting that ended about 10.30pm.

Speaking at a press conference afterwards, Mr Cull said the deal was "the best it could be".

"The bottom line was there was no ideal solution here, so we chose the best one," he said.

However, he criticised the stadium's private sector funding arrangements as "imprudent, highly risky and frankly ... stupid" and the ORFU's handling of its affairs.

"I think there's pretty universal agreement that they [ORFU] cocked up, and they cocked up on a chronic basis. Pretty reprehensible, really."

The future of the union had looked dire at the end of last month, when Mr Graham indicated the organisation was going to go into liquidation on March 2 as it had debts of $2.35 million with a forecast loss this year of more than $750,000.

But encouraged by public feedback and commitment by other parties Mr Graham twice delayed the decision to go into liquidation and then yesterday an agreement was reached by all parties which would allow the union to continue into its 132nd year.

Features of the recovery package include a slashing of player wages by nearly $300,000, All Black tests confirmed for the Forsyth Barr Stadium for next year and 2014, a North-South match to be played in June, with the players taking the field for nothing.

DVML would take over the commercial arrangements of the ORFU and the Otago side has signed a three-year deal to play at Forsyth Barr Stadium.

The ORFU board will resign, and the union's constitution modernised to improve governance. The NZRU would have an observer or representative at all board meetings, and approve all player signings.

The union would cut costs through slashing player payments, and certainty around stadium rental costs. The $270,000 loaned to the union from the NZRU already this year would be turned into a grant.

Change manager Jeremy Curragh would stay on in the meantime, before a general manager is appointed.

Mr Graham described the news last night as "absolutely brilliant" and felt the situation had been on a knife edge yesterday.

"It was the culmination of a lot of hard work but common sense has prevailed. We have come up with an agreement which can only be good for the future.

Mr Graham said the Highlanders had signed a deal to play at the Forsyth Barr Stadium.

He said the board would stick together, although he felt it was time to put a line in the sand and move on.

NZRU chief executive Steve Tew said it was a historic day for an historic union, and said it could not be done without the help of the council.

"The agreement we reached tonight represents a fresh start for this 131-year-old organisation which we know holds a very special place in the hearts of many in this proud rugby province," Mr Tew said.

"It is very satisfying to have reached this point given how bleak the picture was several weeks ago. We could not have done this without the collective efforts of the key parties involved

• Three-year financial plan for ORFU.
• NZRU to provide $500,000 loan for working capital.
• All Blacks tests in Dunedin in 2013, 2014.
• Player wages for 2012 slashed $290,000.
• DCC, DVML to forgive $480,000 debt.
• All proceeds from North v South match to DVML.
• Three-year venue hire agreement for Otago ITM Cup team.
• DVML to manage the commercial and sponsorship rights of ORFU.
• Local businesses prioritised in debt-repayment plan.
• NZRU to enter into an additional sponsorship commitment with BNZ.
• ORFU board to resign.