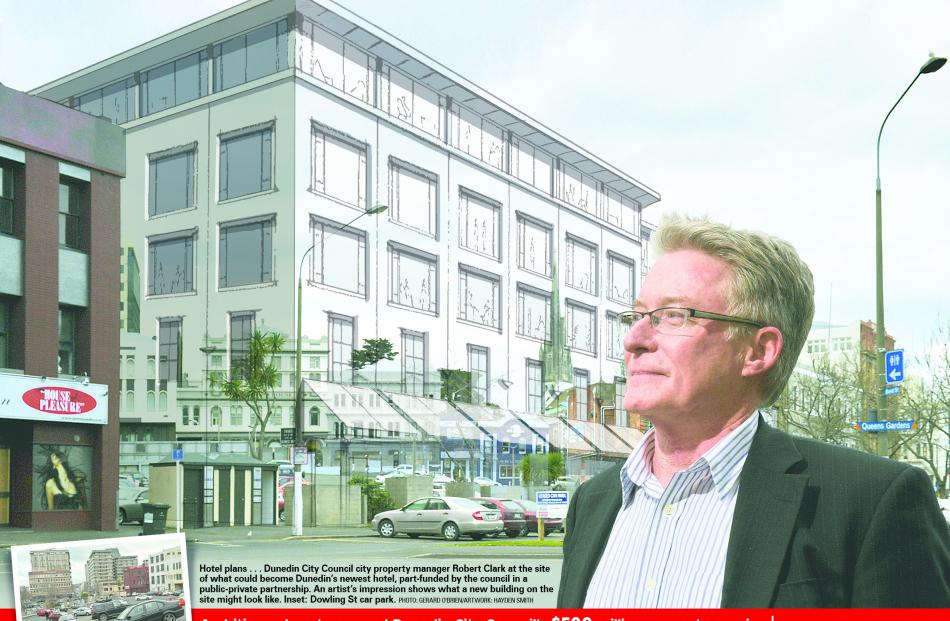 The Dunedin City Council is considering a public-private partnership that could result in a second new hotel being built in the central city.

The idea was among several being considered by the council's city property department to increase the value of the $89 million investment property portfolio it will manage over the next few years.

The proposal could result in a 60-room, three or four-star "boutique" hotel being constructed on the council's Dowling St car park site, south of the Octagon, council city property manager Robert Clark confirmed.

If approved, it would be built together with a multistorey parking building, with the estimated $15 million cost split between the council and an interested private developer, Mr Clark said.

The council would build the car park and the developer the hotel, meaning the two parties would share costs and returns from the investment, Mr Clark said.

Various council departments were involved in discussing the project, but it was yet to be considered by the council's property subcommittee - headed by Mayor Dave Cull - and would also need approval at a subsequent full council meeting.

Mr Clark said that could happen later this year, if a detailed analysis established a healthy return on investment was achievable.

The proposal comes just weeks after it was revealed an unnamed developer was planning a five-star, 28-storey, $100 million luxury hotel on Dunedin's waterfront.

Mr Clark would not name the developer interested in the Dowling St site either, as details were yet to be confirmed, but initial discussions had been positive and concept drawings had been prepared.

Variations on the project could have high-end apartments built instead, or added on top of the hotel for a few wealthy individuals, or a mixed car park and retail development built instead, although the preferred project was the hotel, Mr Clark said.

An office building was another development option for the site, although that would be the least likely to proceed because of a lack of demand for more costly new offices in Dunedin, he said.

The project was one of several initiatives being considered to expand the city's 17-property investment portfolio, which was already forecast to provide a $7.1 million profit - a return of about 8% - in 2011-12.

The profits allowed the council's city property unit to make an annual dividend payment to the council's general coffers, this year forecast to be $4.2 million, which helped offset other council spending and keep rates down.

Mr Clark said he planned to increase the portfolio's value to $104 million by borrowing $15 million and reinvesting it in new projects offering higher returns, potentially including the Dowling St hotel as well as other investments elsewhere in New Zealand.

Other proposals within Dunedin being considered included investing in an $8 million mixed four-level parking and retail development, to be built on the site of the council's Frederick St car park, near Dunedin Hospital.

Two retailers had already expressed interest in taking leases, while private operator Wilsons Parking had indicated it could lease the building and run it for the council, Mr Clark said.

The company might even consider a joint venture to help fund the $8 million development cost, while the Southern District Health Board had indicated early interest in leasing an entire floor for staff parking, Mr Clark said.

The project would also need to be considered by councillors later this year, he said.

He hoped plans for the Dowling St or Frederick St sites would proceed, but doubted both could at the same time.