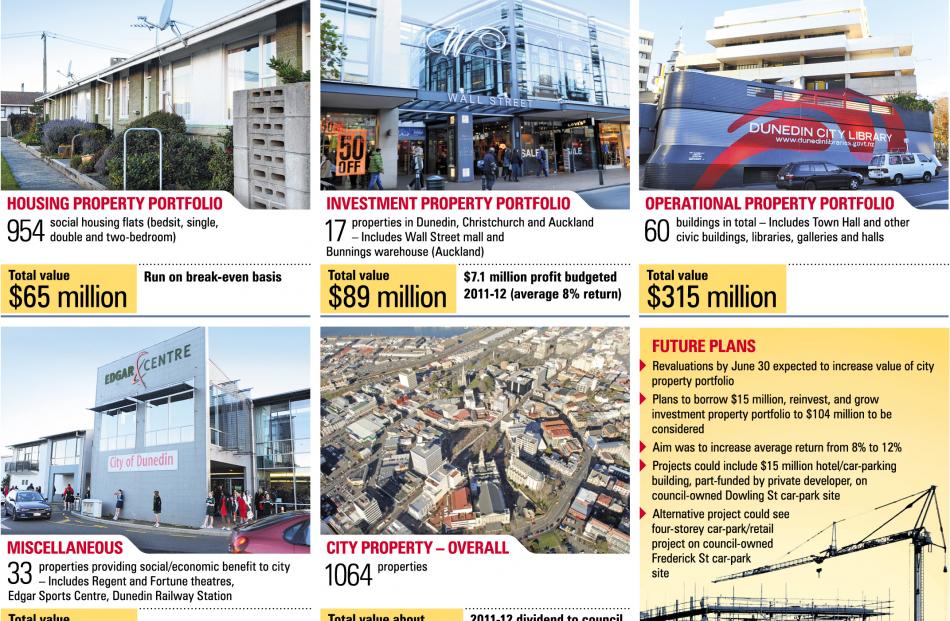 The Dunedin City Council is sitting on a half-billion-dollar property empire, but the man charged with managing it has big plans to expand. Chris Morris reports.

Robert Clark looks at a barren Dunedin car park and sees an opportunity.

An opportunity for a four-storey retail and car-park complex, an office building, or a hotel, perhaps capped by luxury apartments.

An opportunity, also, to boost the city's burgeoning investment property portfolio, and the profits it returns to council coffers each year.

But Mr Clark, the council's city property manager, is not content with stopping at Dunedin's border.

He is eyeing potential new investments further afield, perhaps even in Auckland, as part of a push to expand the value of the investment portfolio by $15 million, from $89 million to $104 million.

Mr Clark was appointed to his post in late 2008, and now finds himself responsible for more than 1000 flats and buildings, together worth about $500 million, spread throughout Dunedin.

The list of assets includes the very big, such as the imposing Dunedin Railway Station, Municipal Chambers and Dunedin Town Hall.

It also includes the very small, right down to bedsit flats offered as cheap social housing to those in need.

The assets are divided into four portfolios within the city property development: housing, investment, operational and miscellaneous.

The council's 954 social housing flats are managed to break even, while some properties in other areas offer a community good and only a small, or nil, return.

The department's staff also offered its services in other ways. These included helping manage "many hundreds" of properties within other council departments, such as water and waste services or parks and reserves, Mr Clark said.

Internal charges were used to cover the cost of providing those services, he said.

However, the books of the city property unit also identify a healthy annual return coming from one relatively new source: the investment property portfolio.

The portfolio has been built over the past decade, after a decision by the council in 2003 to begin progressively selling off its collection of leasehold endowment land, vested in council ownership since the 1860s and 1870s.

The decision allowed sale proceeds to be reinvested in properties offering higher returns throughout Dunedin and elsewhere, with the first purchase, a 1.35ha industrial site in Christchurch, confirmed the following year.

Mr Clark said about 200 leasehold properties had since been sold, the last of them in 2010, earning the council up to $37 million.

It was also that money that paid for the construction of the Wall Street mall, built by the council in Dunedin's main street. The mall opened in 2009.

The $32 million retail complex was paid for using portfolio funds, but now generated annual profits of $2.6 million, amounting to an 8.2% return on investment.

The portfolio also included three properties outside Dunedin: two in Auckland, including an $11 million Bunnings store in Porirua, and one in Christchurch.

Together the portfolio's 17 properties were expected to generate $7.1 million in profits this financial year, amounting to an average return of about 8%.

The healthy profit allowed the city property department to return a $4.2 million dividend to the council's coffers in the last financial year, and the same was forecast for the 2011-12 year, Mr Clark said.

"It's a direct return to council and the income reduces the rates."

However, a plan to grow and diversify the portfolio could increase that, by boosting the overall value to $104 million and returns from 8% to 12%, he said.

"That's the plan." To do that, Mr Clark was eyeing several potential projects in Dunedin, including a partnership with an interested private developer to build a $15 million hotel and car-park complex, or one of several variations, on the council's Dowling St car park.

Neither project had been signed off by councillors, but both were expected to be considered later this year, with a possibility one, but not both, would proceed.

The projects could be funded as part of the plan to borrow $15 million to lift the portfolio's value, which would push total borrowings on the portfolio's books up to $31 million.

However, Mr Clark believed other changes should also be considered to enhance the investment portfolio's value to the council.

At the moment, about half of the entire portfolio comprised retail, largely due to the Wall Street mall, and about three-quarters of total investments were within Dunedin.

Mr Clark said shifting that balance over time, until 45% of the portfolio's funds were invested outside Dunedin, would help reduce risks.

"Good quality investments in this current environment are still hard to find."

There was also an argument the council, having successfully developed the Wall Street mall, should now look to sell it.

Mr Clark said any move to do so "wouldn't find favour with me" at the moment, because of the healthy returns the mall offered and the poor state of the global economy.

However, that could change in a few years, and the council's property investments were regularly reviewed to identify those not performing to their full potential, he said.

Any sale would also need to be endorsed by councillors, he said.

The total value of city property's $500 million building portfolio would also increase once upgrades of the Town Hall and Otago Settlers Museum were completed, and once other regular revaluations were completed.

That could result in the value of the $315 million operational portfolio division, including the Town Hall and other civic buildings, rising "closer to $400 million", Mr Clark said.