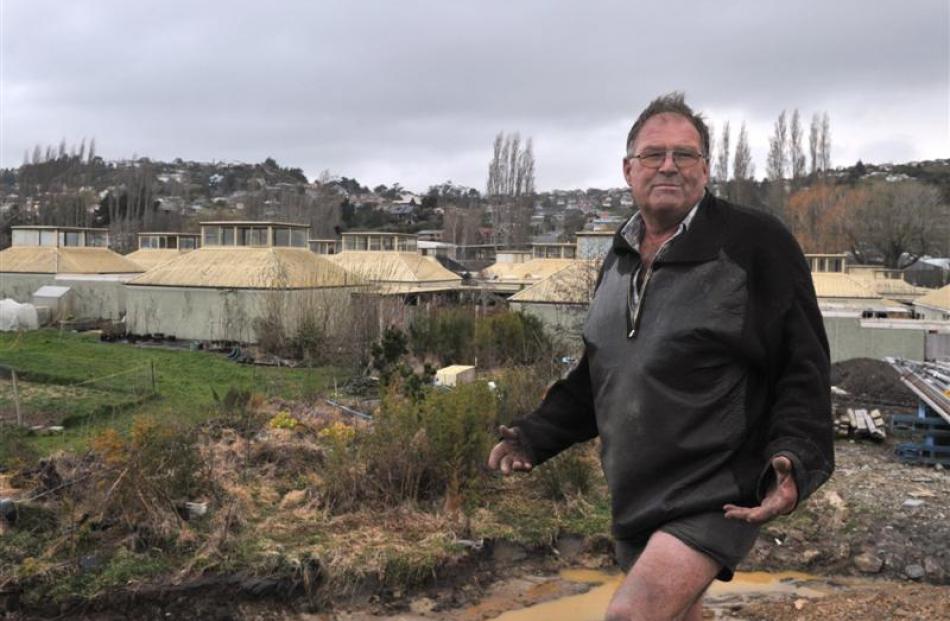 Rodney Hogg's dream subdivision has turned into a $1 million ''nightmare'' after a frustrating fight with the Dunedin City Council.

Now the 65-year-old and his wife, Carolyn, are facing the prospect of starting again, while still paying off debts and haggling with the council over unpaid bills.

But Mr Hogg told the Otago Daily Times he had no plans to quit the city - however tempting the idea might be.

''We'd love to shift to Central Otago and get right out of the DCC area ... but we've got to try to battle it through.

''We want to pay it all back and see everyone right. We're trying to do the right thing, but it's hard.''

Mr Hogg was speaking ahead of a meeting of the council's hearings committee, which spent yesterday listening to parties objecting to council fees.

Mr Hogg objected to a council bill for $3232.85 relating to his shelved subdivision plans for the old Kenmure Intermediate site in Kaikorai Valley.

Mr Hogg and his wife bought the site from Ngai Tahu in 2002, and had planned a 44-section gated community.

The couple initially ran a landscaping and nursery business from the site, but dreamed of a ''special'' community development of larger sections and park-like groves of trees.

They spent about $2.5 million buying the 6.4ha site and planting trees, building roads and a cul-de-sac, adding drainage and consulting surveyors and engineers.

But Mr Hogg said the project stalled in early 2013 after council staff insisted the site's single-lane bridge over the Kaikorai Stream needed to be upgraded to a two-lane bridge, at a cost of about $800,000.

After a meeting in January 2013 failed to resolve the difficulties, Mr Hogg decided to ''pull the pin'' on the project.

His surveyor continued to meet council staff to try to rescue the project, but failed, and in August 2014 the council's bill for staff time arrived in the mail.

Mr Hogg said the bridge requirement had been ''ridiculous'' and possibly also ''illegal'', as a bridge inside a gated community was ''none of their [the council's] business'', he said.

Council resource consents manager Alan Worthington, responding to Mr Hogg, said he could find no written record of council staff requiring a two-lane bridge, nor could staff recall such a request.

The council had the authority to require one if deemed necessary, but it was primarily concerned about any traffic impact on Kaikorai Valley Rd, he said.

''If the bridge was part of a private lane then it could remain as it was,'' he said.

However, Mr Hogg maintained the bridge was among a series of extra requirements added by council staff as the project moved through the pre-consent process.

That included a requirement to set aside a 40m strip along the edge of the Kaikorai Stream for public access.

Council staff only told them when it was too late the strip's size was negotiable, and could have been halved, to 20m, if discussed earlier.

He said the wider strip cost him ''quite a few sections'' and $2.5 million in lost value, but Mr Worthington disputed this.

Mr Hogg's application was ''not as clear as it could be'', but the strip had been discussed by his surveyor and council staff since 2009, Mr Worthington said.

Mr Hogg said economic conditions had added to the subdivision's problems, but the project would have proceeded if not for the council's approach.

Some council staff had been ''fantastic'', but others appeared ''out of their depth'' and failed to communicate adequately, he said.

The couple's assets had evaporated during the ''nightmare'' project, leaving them $1 million in debt even after the sale of the site.

They were in the process of relocating their Trees of the World nursery business to a new Riverside Rd site, near Mosgiel, but still faced starting again when others their age were retiring.

''It's been a major blow and the council don't think anything of it.''

Mr Worthington said the council tried to help where it could, including making planning staff available - free of charge - to answer questions at the pre-application stage.

''The council has an interest in ensuring the business community does well, which has positive knock-on effects for the whole community.

''The council does look for opportunities to improve service and will seek to learn from those situations that don't go as well as they might.''

The committee deliberated without the public after yesterday's hearing, and was expected to release a decision at a later date.

• Plans for a 44-lot subdivision on 6.4ha at former Kenmure Intermediate School site.

• Land bought from Ngai Tahu in 2002 by Rodney and Carolyn Hogg.