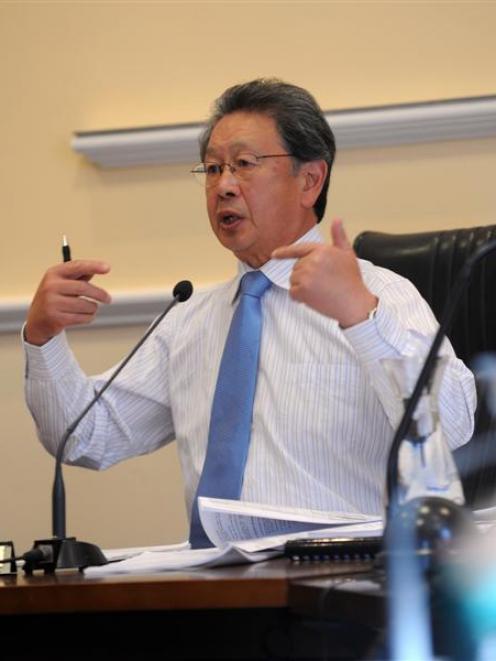 Mayor Peter Chin discusses the council's options at an annual plan meeting yesterday. Photo by Peter McIntosh.
The $45 million Dunedin Centre and Dunedin Town Hall projects have been rejigged and delayed by a year as Dunedin city councillors try to contain the size of this year's rates increase.

The more than $30 million Otago Settlers Museum redevelopment narrowly escaped budget cuts yesterday, with a one-year delay that could have compromised government funding beaten by a single vote.

However, the Regent Theatre's upgrade time line hinges on $2 million in fundraising being in place by the time the annual plan is approved in June.

The council ended the public part of yesterday's meeting with a 5.2% rates increase (down from 6.4% before the meeting), mostly from deferrals.

Those figures may change, as the council discussed the future of its harbourside project with the public excluded yesterday afternoon, and will consider Dunedin Venues Management Ltd's request for $2.4 million today.

The major projects were targeted by the council as it sought to cut this year's rates increase.

The changes mean the Regent Theatre work begins at the end of October this year, the Municipal Chambers in June 2010, the Dunedin Centre in March 2011, and the town hall in September 2011.

Deputy mayor Syd Brown moved options laid out in a report by community life general manager Graeme Hall and property manager Robert Clark, which delayed all the projects for a year.

That report, though, noted $3 million of Ministry for Culture and Heritage funding for the settlers museum would be at risk, and other sponsors might back out, if the time line of the project was increased.

Cr Brown said it would be a blow to some of the organisations involved, but a 12-month "breather" would ease some of the pain for ratepayers.

A venue was needed for graduation ceremonies, and with the option suggested, the town hall would remain in its present state until 2011, while the Regent could be used after that.

If the Regent could not raise the funds, it would still be available for graduations, as its upgrade would not start until the town hall was finished.

Cr Dave Cull seconded the motion, his motivation to "flatten the rate increases imposed on the city by decisions we've made in the last year or so to put so many debt-heavy projects in our time line".

Mayor Peter Chin argued against delaying the settlers museum, and said the council had been dealing with organisations involved for years, and the museum and funding organisations had been working under the present time line for all that time, and relying on it.

They would have a right to feel "aggrieved" if it was changed.

Other councillors raised concerns about the loss of government funds, with Cr Teresa Stevenson arguing the latter stages of the project may have to be dropped.

The council voted seven votes to six not to approve the option.

During discussion on the Regent Theatre, Mr Chin said he was confident the Otago Theatre Trust would be able to raise the necessary funds.