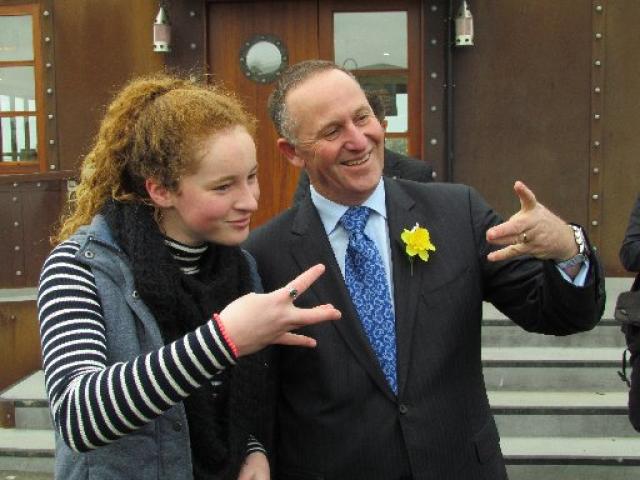 A boom is envisaged for the Alps to Ocean cycle trail after a grant of almost $1million was announced for the project yesterday.

''The greatest dad ever - I couldn't have asked for better,'' is how Jared Wallace has described his father, Rob, who died in a workplace accident in Oamaru on Thursday afternoon.

A new Waimate irrigation scheme capable of providing water to up to 32,000ha now has enough shareholder support to move on to the next stage of investigations after fears in April some farmers might be backing out.

The Dunback tennis pavilion will be leased out by the Waitaki District Council, despite opposition from some people and one group in the community.
A five-year project aimed at reversing the decline of the rare Canterbury mudfish is being planned by the Lower Waitaki River Management Society, with backing from the Department of Conservation.

Some rural residents near Weston are ''battling big business'' over the appearance of a contracting yard near their properties.

On the day after his retirement, ODT Oamaru bureau chief David Bruce reflects on his 46 years as a journalist.

Prime Minister John Key does not believe the Government can legally intervene over funding for Oamaru Hospital and Waitaki district health services facing the threat of less money from the Southern District Health Board.
The Oamaru Licensing Trust has recorded a surplus for the second year running.
The cost and size of a new irrigation scheme for Waimate will be known early next year so farmers can consider whether to pay the third instalment on shares they have bought to be part of it.
A North Otago group is bringing an opponent of legalising euthanasia to Oamaru to speak on what it says is ''a controversial topic''.
St John's Presbyterian Church and parish at Herbert will celebrate its 150th anniversary at the end of this month, even though regular services are no longer held there.

One of Oamaru's historic buildings which links the town to the establishment of New Zealand's frozen meat industry at Totara has been declared dangerous by the Waitaki District Council.
The Waihemo Service Centre and Library in Palmerston is to get a make-over by the Waitaki District Council and will close while that happens.
A three-month trial of a community vehicle for Kurow will begin at the end of the month.

A car broke in two yesterday when it collided with a van on State Highway 1 just south of the twin bridges across the Waihao River near Waimate.

Low oil prices have forced Tag Oil to review plans to test-drill an onshore well at Peebles on the Waitaki Plains.
A wetlands restoration and planting project at the Waianakarua River will feature at the annual meeting of a North Otago organisation that is the oldest of its type in New Zealand.

Ohau Snowfields provided United States ambassador Mark Gilbert and his family with their first taste of skiing in New Zealand when they joined his country's ski team over the weekend.

A North Otago family has praised the support it received from the Omarama community ''and beyond'' in the search for their father who went missing on August 6.